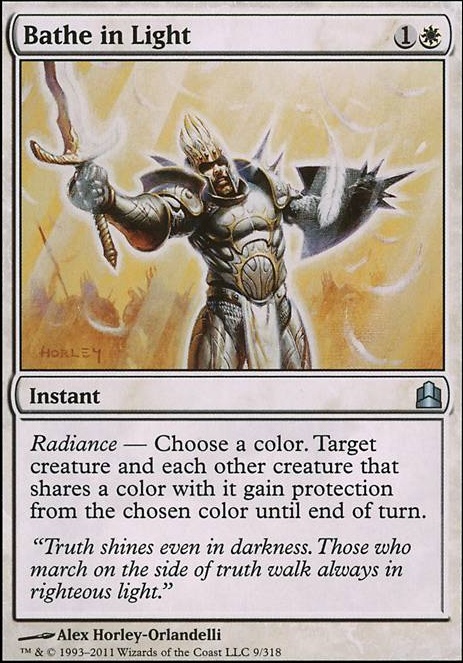 Radiance - Choose a color. Target creature and each other creature that shares a color with it gain protection from the chosen color until end of turn.

Minor improvements, your rocks make a lot of colorless mana. Most of your spells are one or two mana, and don't use much or any colorless mana. Replace them with Marble Diamond or Fire Diamond or something similar because I am sure you will find Thran Dynamo will not be as useful as you want.

Akroan Conscriptor with Cloudshift will cause permastealing creatures as a nice combo.

You included some odd choices for protection. Apostle's Blessing >> Faith's Shield or Blessed Breath unless you really think protection from artifacts will be relevant.( Bathe in Light is also good in it's own way)

Niveous Wisps and Crimson Wisps is another solid option from card draw. Guided Strike is decent too.

Magnetic Theft + Sunforger is a nice tutor combo. To be fair you can also steal equipment from other players as well with this without Sunforger

Vanguard of Brimaz and Akroan Crusader can be useful for better blocking and adds more creatures.

For win cons you can think about Aetherflux Reservoir , Sphinx-Bone Wand , and even Sentinel Tower .(even if that one only works on your turn) You can also add Guttersnipe to end games as well.

A Fun add is Intimidation Bolt . Hit you own creature and you can't be attacked for the rest of your game as long as you have 3xplayers mana. (oh look Feather, the Redeemed is a 3/4, and will live from that ;) )

Other stuff: I think you might have missed this if you want targeted removal: Fall of the Hammer if you need/want the ability to destroy utility lands: Seismic Shift possibly Bathe in Light ?

AdNauseam12, thanks for taking the time to give me that advice! I figured I'd have to give up my "jack of all trades" approach for something more consistent. Never thought of Slippery Bogle so thanks for that tip. Having my creatures removed has always been a worry which is why I run Bathe in Light and Emerge Unscathed but I can see how having a creature with that built in would save me a lot of trouble. I used to run 2 counters in here but took them out for more auras so I'll work on fitting them back in. How many should I run do you think? Also should I spread it out between creature/non-creature counters or get some cost 3 counters that can counter anything. Right now I'm leaning towards running more non-creature counters since being countered or removed is more of a problem for me than creatures.

Also thanks for giving me the heads up about Enlightened Tutor ! Must have missed that when I was looking through the ban list.

you should cut down Searing Blood, Wizard's Lightning and Kari Zev's Expertise to add Manamorphose Mutagenic Growth and some protection like Apostle's Blessing/ Bathe in Light/ Shelter, since you want to go full on aggro and probably dump your hand the moment you attack with Kiln Fiend adding Fling back to the deck in the post board or in the main board can give you just enough reach to kill the opponent if you couldn't in the early game. (some of the suggestions need you to splash a color)

Whenever I start putting together an angel tribal deck it always begins like your. SO many cool creatures to cast. Unfortunately waiting until turn 7+ to be able to cast most of your creatures not a great plan for a deck. Save yourself a lot of grief and rebuild your deck with these ideas in mind: 1. Drawing cards is the best thing you can do in Magic. Will your opening hand have a card in it that allows you to do draw cards? White really struggles with this but even things like Mind Stone and cycling lands can help. 2. Hitting your land drops is the second best thing you can do in Magic. You need at least 40 lands for a deck with expensive creatures like these. 3. You need a plan for getting your creatures through. Brave the Elements Bathe in Light could help. I personally like Whispersilk Cloak as long as you're getting rid of a lot of your auras.