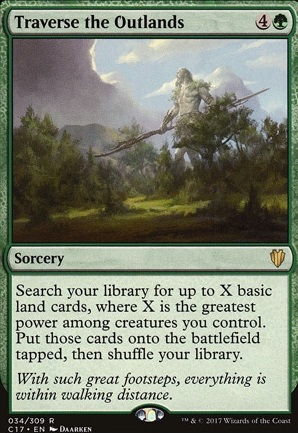 Search your library for up to X basic land cards, where X is the greatest power among creatures you control. Put those lands onto the battlefield tapped, then shuffle your library.

Traverse the Outlands occurrence in decks from the last year

Who wants a pet?
by humanxperiment 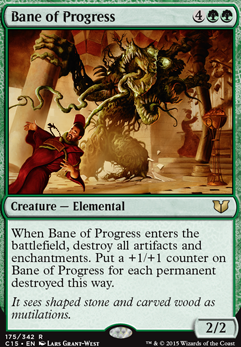 Here are the changes I'm about to post, FYI:

Memorial will be missed, but this deck has been leaning heavy into the burn side of things for a while. Both cards close out games, but we slots for finishers are limited in any good deck list.

Traverse is another spicy card, but adding in more Surge to the deck is just nuts.

Reclaimer was just to slow. I'll keep my copy handy though, in case I add more utility lands.

Easiest upgrade in ever.

The times this deck would lose is because my hand was empty. This will help fix that, while al

I really like Tempt... but the deck needs for draw! Return is likely the weakest draw in the deck, but it helps that is can also be used to kill someone.

The main pull here is being able to tutor the effect. It also help that this deck runs several sack-outlets.

I made this change a few months back, but now its official (Finally got my hands on an EXPO Tomb!)

What's the MANA with you?

Traverse the Outlands when Omnath is big is fun. Same with Return of the Wildspeaker.

Field effects to give your creatures trample like Ferocity of the Wilds or Elf-tribal effects like Elvish Champion would add some evasion for your commander.

Traverse the Outlands after you pump your commander would be spicy. Same with Return of the Wildspeaker.

XinZhao: I have honestly been underwhelmed by Traverse the Outlands in this deck. About 99% of the time it will be giving you 5 basic lands, which is not bad, but not something super unexciting at 5cmc. Also, with 20 basic lands in the deck it is not uncommon to to not have 5 lands to grab by the time we play Traverse. I think it is an alright card, I am just trying to lower the curve on my ramp spells overall. When it comes to Akroma's Memorial, I think the card is good as well, but I almost always won games without it. Everytime I could win with it I found that it was more of an option then necessary. Having more "burn" in the deck is much better then combat abilities if you ask me.

Zilkios: I think Allosaurus Shepherd is definitely going in many Om_rath decks! I (luckily) don't have many blue countering players in my meta. Everyone just finds it boring I guess. But, if you find the need and have the slot, go for it.

So, like I mentioned earlier, I am looking for one or two more draw spells to add to the deck. What do you guys think about Return of the Wildspeaker and Compost?