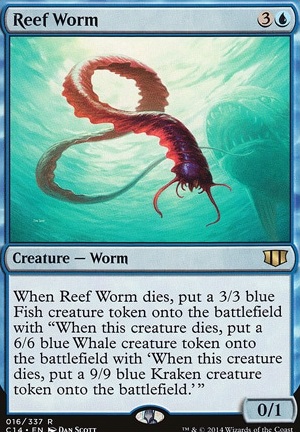 Reef Worm occurrence in decks from the last year

Flock of Seagulls
by YoyoGod44

Great deck! I started playing EDH with the Arcane Wizardry deck and was really impressed with what are now two of my favorite cards, Marchesa and Vindictive Lich. My next goal was to create a deck using Marchesa to abuse his ability and it's one of my favorites! Here's my list if you're interested: Itâs a great day to die, again and again. Gotta say that I really enjoy Living Death in there, especially with Archaeomancer allowing you to retrieve it from your graveyard time and time again. This really throws off opponents' plans and with Grave Betrayal keeps creatures out of their graveyards and onto your battlefield. I'm also quite fond of Reef Worm and Chasm Skulker because they can create a lot of tokens. Great deck! +1 from me!

Why isn't Reef Worm in this? I use the reef worm with greater good to instantly get a 9/9 Kraken with a sac outlet. Then, if you're able to, cast it again from the graveyard.

I run it in my muldrotha deck. I've resolved a reef wurm with Doubling Season and Parallel Lives in play. I ended up sac'ing everything into Altar of Dementia and with Altar of the Brood on the battlefield to mill out my opponents. 1 worm creates 4 3/3 fish, which creates 16 6/6 whales, which created 64 9/9 Krakens. Then I cast the worm again from the graveyard with muldrotha and created another 64 Krakens.

I'm going to word it a little bit differently, rdean14 because I don't know if you mean specifically -X or if any minus value works and X was used as a generic placeholder. This way, it doesn't matter how much loyalty is removed, only that it was removed. :)

Whenever you activate a loyalty ability of a Planeswalker you control by removing loyalty counters from it, Burn Power deals that much damage divided as you choose among any number of creatures.

I'd like to see a color-shifted Reef Worm that uses appropriate creature types for the scaling ability. For example, you may end in Dragons if it's red or perhaps end in Wurms if green, or Demons if in black.

Feel free to use keyword abilities to meet your scaling requirements. Don't feel like you need to end in a 9/9 creature. A 4/4 Demon with Flying and Lifelink is arguably more powerful than a 6/6 Demon with Flying as the total seperation of life totals is +/- 8 once it connects with an opponent. Yes, 4 damage is less than 6, but 4 damage + 4 life is a greater spread than 6.

Please keep it mono-colored, as it will help streamline the process. It'd be kind of silly to jump from a 4/4 white Angel with Flying into a 6/6 green Wurm with Trample, afterall.

@GeistKing I agree with multimedia. Ezuri is a bit more expensive but is a much more efficient engine for what you'd like. You're only losing out on some card draw, but you're in blue anyway so you're good on that. I'd also stray away from landfall effects and stick to one main theme (tokens), and maybe a little sub theme (+1/+1 counters) just because its a budget deck. Obviously include staple ramp and card draw spells. Budget token generation is hard for me to help with because I'm not worried about budget myself. You could add Orochi Hatchery or Snake Basket . Chasm Skulker and Reef Worm come to mind, as well. I know it's expensive but you cant really run Green tokens without at least Parallel Lives . Doubling Season would be a game changer in an Ezuri token deck but to each their own.

Also, my own Commander suggestion, if you may: if you really like the whole Biomass Mutation + hella tokens idea, then you should look into Brudiclad, Telchor Engineer . Tons of shenanigans. Almost kinda sorta a Biomass Mutation on a stick but better imo. And you get to do things like replicate your creatures with Quasiduplicate or something, then turn all your tokens into whatever you copied. My personal favorite is Scuttling Doom Engine + a sac outlet. Or just hang out and dare someone to board wipe lol. Also replicating Hellrider or Inferno Titan , then turning your tokens into either of them is great fun. For you at least, not anyone else lmao. Games are always different and diverse with Brudiclad and I bet he can be a decent budget commander. You can take a look at my Brudiclad deck if you'd like, its on my page. It's not budget in the least, but it will give you an idea of how the deck goes.

When Kiora, Ocean-Caller enters the battlefield, look at the top five cards of your library. You may exile an artifact, a Kraken, Leviathan, a Serpent or a Whale. Put the rest on the bottom of your library in a random order.

Whenever an opponent puts the top five or more cards from their library into their graveyard, you may cast the card in exile. If you do, transform Kiora, Ocean-Caller.

Kiora, Queen of the Abyss

+1 Target opponent puts the top three cards of their library into their graveyard. Add .

-4 Gain control of target creature or artifact for as long as you control this Planeswalker.

-9 You get an emblem with "At the beginning of your end step, create three blue Reef Worm creature tokens."

Maybe an Origins Angrath?? Or any other. Doesn't matter.

Creatures of the 7 seas

Here are some maybeboard suggestions: Lands: Field of the Dead - With all of the land recursion, it seems like this would generate a lot of value. You could get 2 2/2 zombies off of a fetch land. Plus, as I'm writing this TCGPlayer has it for $1.50.

Creatures: There are two creatures in the deck that I think have good recursive value, but are my least favorite in the decklist. I would replace either Reef Worm (doesn't do anything when it hits the battlefield, can be exiled), or Phantasmal Image (depends on another creature on the battlefield.) Consider these two as they're synergystic to a degree: Arcum Dagsson - Baleful Strix , Wurmcoil Engine , and Spellskite are all targetable by this dude. He can fetch any of your noncreature artifacts. TCGPlayer has it for $13.00. Corpse Connoisseur - Recursive Entomb . <$0.50.

Enchantments: Figure out a way to include Secrets of the Dead .