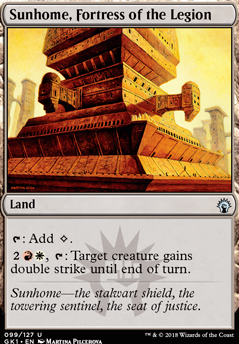 Sunhome, Fortress of the Legion

Sunhome, Fortress of the Legion occurrence in decks from the last year

Sunhome, Fortress of the Legion Discussion

Thanks! I was toying around with Grim Haruspex a little bit, and I think I will include it as my search to make a human-token-based aristocrat deck simply isn't working out as well as I'd hoped. I saw Falkenrath Aristocrat, I suppose I just didn't see the value in it, but you pointing it out made more sense than I initially thought. I made this deck at like 2am, so I guess I overlooked the fact that the tokens were Soldiers, not Humans like Elspeth, Sun's Nemesis makes. I'll also certainly add Sunhome, Fortress of the Legion.

I'm working on a deck with the same commander and I'm very excited.

Some of the other cards I was looking at that might be interesting.

Falkenrath Aristocrat, a second Silvar but it with wings and haste

Sunhome, Fortress of the Legion, surprise double strike on the commander.

goldlion I agree with all of this!

Good thoughts on Eesha, I'll make sure to test her out at some point! Quick question, you mentioned her blocking anything but trample, but as far as I know, trample can't go through protection, since it never deals damage and thus can't have any excess damage for the player, right? Just curious on this ruling, I know indestructible doesn't completely stop trample, but I figured protection from creatures would.

I'm not sure how I missed Farhaven and Wood elves, I usually like to use them in green. They would be a good fit here, so I'll grab them when I get a chance. Also, perhaps the little known Yavimaya Dryad which has more synergy with the deck, being essentially a Wood Elves with evasion, but is a little harder to cast with a 3-color mana base.

I like your suggestion of Rogue's Passage, and I think its versatility could be high in this deck, since it can be aimed at an opponent's creature as well as our own. For a similar reason, I think Kessig Wolf Run and Sunhome, Fortress of the Legion could be good too. (Kessig Wolf Run is underplayed in EDH in my opinion, I think most RG decks should be including it, it's so useful.) Don't want to have too much colorless in this 3-colored deck, though at least it's greem so finding all the colors shouldn't be too hard.

I actually got a little hasty a few days ago and ordered enough cards to get the deck together in at least a playable state, so I'll get some chances to play it and figure out what works and what doesn't before I start making revisions again. Unfortunately that means I missed out on a lot of awesome cards presented in the last couple days. Don't hesitate to keep giving suggestions though, I'm enjoying what you have to say!

I probably should have put more of my budget into the manabase, but eh, I'll just have to make do with guildgates and stuff for a while. I'd ideally like untapped mana consistently on the first few turns to ensure my evasive stuff hits early, but in time I can start adding things like Shock lands, Crowd lands, Grove of the Burnwillows and the hilariously on-theme Forbidden Orchard. For now, a slightly slower start will be fine, though I am playing the three Fast lands in my colors.

For Whom The Belle Tolls - An Enchanted Tale

Love the deck. Was wondering if reason you run Mark of Fury over Instill Energy or Escape Velocity is so you could cast it on some of the other tap for mana creature cards in the deck, when extra mana needed, as opposed to its sole purpose being to attach to Uril? Also wondered how you feel about putting in Kenrith's Transformation, instead of Generous Gift or Beast Within? Is one mana less, you lose instant ability, but gain the card draw from enchantress and others and from the card itself. Also curious about using Gift of Immortality? Or with other guards in deck are you not too worried about Uril getting removed enough to justify taking out a more efficient cheaper aura for it? Also have gone back and forth between Slayers' Stronghold and Sunhome, Fortress of the Legion. Destiny Spinner is one of the new Theros cards I threw in (great value) and I replaced Bloom Tender with Dryad of the Ilysian Grove. Also have my eye on Transcendent Envoy and Setessan Champion as well...Love to hear your thoughts, your deck is awesome. Smash, smash, smash.