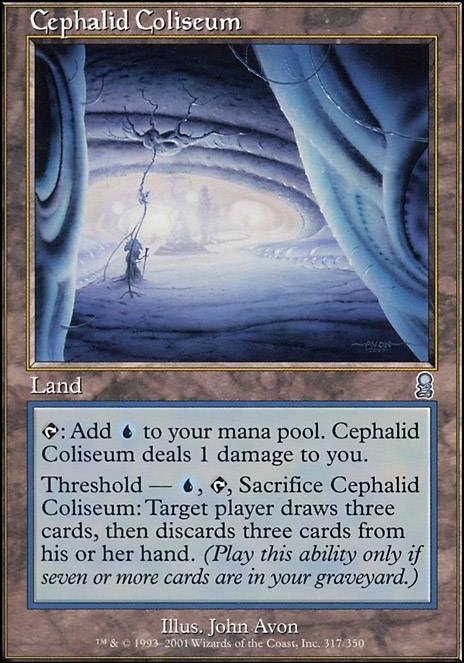 Tap: Add to your mana pool. Cephalid Coliseum deals 1 damage to you.

Cephalid Coliseum occurrence in decks from the last year

Spin the Wheel
by asarov

Pikobyte, as I say in the description this is a non combo centric deck, hence your suggestion is not something I would put in the deck.

Bear Umbra, Sylvan Safekeeper were in the deck for many months before being eventually cut for better replacements, they just did not put in the work.

Song of the Dryads and Imprisoned in the Moon I've tried for a little while and as the cards above they were also cut. However I have thought on multiple occasions to try Kenrith's Transformation since it still deals with opponents commanders and replaces itself.

Crystal Vein over the span of this deck life I've found that much colorless mana is not something it needs and/or can utilize, for this reason I've kept the colors producing permanents to a minimum.

Cephalid Coliseum is indeed a very good suggestion, I'll put it in the next testing phase!

Crystal Vein ramps with Muldy out.

Bear Umbra is nothing short of amazing here. Allows you to aggressively progress your gameplan on your first main and still hold up plenty of mana for answers (or just play more stuff). Totem armor does a hell of a job at keeping Muldy in the game also.

Song of the Dryads/Imprisoned in the Moon are versatile and backbreaking against decks that're reliant on their commander. They're reusable (assuming they ever get rid of it) and only reliably answered by 2/5 colors.

Feel free to check out my list for ideas. It's retired but upvotes are still appreciated. Muldrotha's Madhouse - No Infinite

Fastest Hand in the West

Cephalid Coliseum a land that can dig deep

Ok, I have a few suggestions for you and I'll try to keep it budget(ish) friendly.

The main thing I see that needs some tlc is your mana rocks. I'd drop all your lockets etc. that cost mana and get the rest of your Signets and Talismans in here. Dimir Signet, Talisman of Dominance, and Talisman of Resilience. Crystal Vein will also ramp into Muldrotha and can ramp in one turn with Muldy in play.

Random Goodies: Animate Dead is worth it's weight in gold here. Cephalid Coliseum is excellent draw here. Last us Pernicious Deed because a reusable boardwipe on a stick is amazing.

Feel free to check out my list for ideas. It's definitely not budget friendly but you may find a few ideas there. Upvotes on any of my decks are appreciated. Muldrotha's Madhouse - No Infinite

@Komamura I like your style. Thank you for the insight!

Benthic Biomancer is kinda silly. My friend told me about it since he too was looking to build Shabraz and Brallin, Skyshark Rider

Tireless Tribe is also odd. I added it because PlaytoWin on YouTube said so, but I now realize the tribe + Brallin + Curiosity is gg

Kozilek & Ulamog are mostly meant to be discarded to reshuffle haha but maybe I'll ramp to hard cast ?

Key to the City will likely come out of the deck. Undecided atm.

Cavalier of Flame, Dream Trawler and Heliod, Sun-Crowned were all booster pack pulls. I'm stoked to have them.

Whirlwind of Thought is a whirlwind slam dunk, just gotta wait until the new set arrives. I'll have to print out Brallin&Shabraz proxies if I want to use the deck currently

@Thornspire my pleasure, and I very much appreciate the kind words!

I have a few friends that bring the heat, so I need to keep em on their toes with spot removal, boardwipes, and I should probably run more counterspells in my blue decks. They are a necessary evil

The Ozolith is interesting. Once I get some games in, if I feel like my commanders are being removed constantly I'll probably invest in one

Very torn on Sigil of Sleep. Been seeing it in a lot of lists and I know I have a playset somewhere. Two friends with graveyard theme decks run a lot of ETB creatures I'm scared of (Plaguecrafter etc), but it can be a continued control piece for one mana on Brallin

Land Tax is a great idea! It makes Tectonic Reformation 100x better. I'll pick one up if I find a good deal. I like where your head is at

Thanks again y'all! You both have fun builds and it's neat to see differences & similarities in the three.

I can't want to actually play the deck!

Hey, thanks for the nice comment on my list! I took a look at yours and I have to say it probably wins more games than mine, simply because you play a lot more interaction (which is good) and you have access to the zero mana ramp.

Some cards I would definitely consider:

Cephalid Coliseum: An amazing land in the later stages of the game with negligable cost of life loss. Three triggers from both commanders and with Narset you can make someone else discard three cards.

The Ozolith: Low opportunity cost and saves all the counters from both commanders (even if bounced or exiled). Also cute with Benthic Biomancer.

Sigil of Sleep: one mana to enchant Brallin and every time you discard a card you can bounce a creature from each opponent. Seems like a good deal to me.

Land Tax: Since you're not playing green, this will give you a lot of cards to discard and lets you keep the goodies.

There are not clear cuts to me, but I agree with some of the points from the earlier comment on Key to the City and Tireless Tribe.