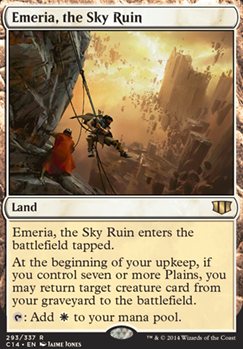 At the beginning of your upkeep, if you control seven or more Plains, you may return target creature card from your graveyard to the battlefield.

Emeria, The Sky Ruin sees a lot of play in Martyr Proc, which stalls out games by looping Martyr of Sands as its main strategy, but since this deck has a bigger focus on fast aggro, it's very unlikely a game will last enough for me to play 8 lands. So the fact it comes into play tapped is too big a drawback to run it.

Path to Exile is definitely good and I'm trying to figure out how to make room for it currently. Chalice of Life Â Flip is fun and I used to run it in an older lifegain deck, but by the time I have enough life to trigger it, I could be triggering Serra Ascendant instead, which costs just one less mana and synergizes better with the rest of the deck.

Heliod, Sun-Crowned on the other hand is super strong! A lot of recent Soul Sister decks are using it because it goes infinite with Walking Ballista, and turns your other creatures into Pridemates too. My only issues with that combo is that I'd need to afford playsets of both cards and they are both very expensive, and also that Walking Ballista doesn't really do much in this deck without Heliod being around. But mostly this combo is out of my price range, haha.

I don't know much about modern, but I wish I did. :^) As far as I know you can't go wrong with Path to Exile though. There's also Chalice of Life Â Flip and Emeria, The Sky Ruin, though I'm pretty sure the former was mostly used in some of the earlier takes on the archetype. The newer Heliod might be a fun pick but I don't know how he'd fare in modern. He was nasty in standard lifegain tho.

I like your deck. Seems fun, fair, and affordable. Hope I was of some use. :^)

Hello! Love the deck. Edh needs more honest aggro decks. Why not Emeria, The Sky Ruin though? Don't think you'll get that many plains with only 28 lands?

If you are pushing to get Emeria, The Sky Ruin to go active, doesn't it make more sense to play cards that get you extra lands instead of ramping with artifacts that have no other synergy with your deck? All of the cards I suggested can help you get extra Plains on the battlefield. Azorius Signet, Selesnya Signet, Talisman of Progress and Talisman of Unity don't. They are also not creatures, and you want to cast as many creatures as possible with Oketra.

I get that you're trying to use as little green as possible, but these are just ramp cards that are supporting your core strategy. Why limit yourself when you have access to the best color for ramp?

The curve is pretty darn low and our wheelhouse is resource denial via exiling (our commander isn't a combo in the zone and isn't a formidable threat in play either). Ramping out with no targets doesn't help us terribly much and rocks mid-late game are just poor topdecks and not abusable via recursion

Chromatic Lantern fixes our mana to a tremendous degree, but honestly its not even essential anymore

Thaumatic Compass Â Flip gets multiple lands and then becomes a Maze of Ith which can be utilized when our landbase is tight. ideal for setting up Emeria, The Sky Ruin

more rocks in the deck will smooth things out but limit resource slots. Ultimately dealer's choice :)