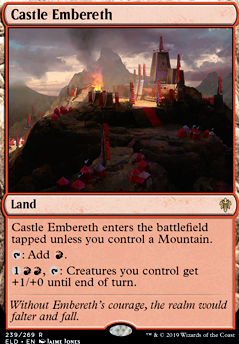 Castle Embereth enters the battlefield tapped unless you control a Mountain.

A Song of Steel and Glory
by steelangel 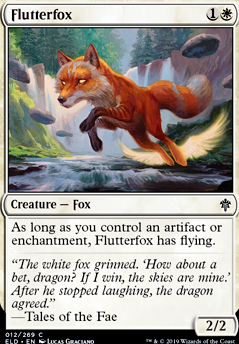 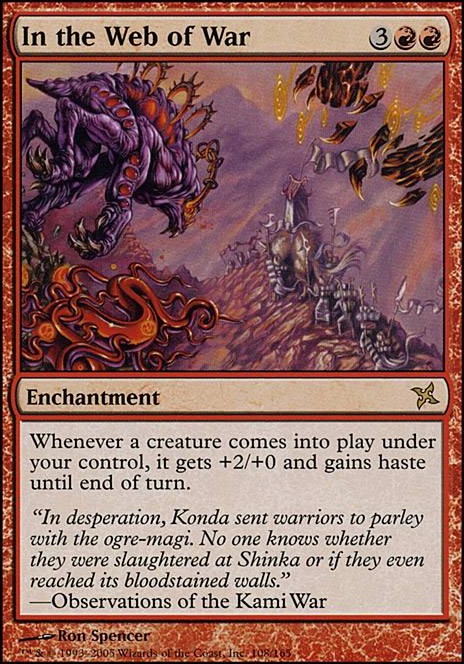 I've faced similar decks on MTGO and I was thinking of building one. My ideas were to replace the four Goblin Rabblemaster with three Kari Zev, Skyship Raider and the two Chandra, Acolyte of Flame with three Reckless Bushwhacker. This lowers the curve and financial investment of the deck. It also makes the plan B stronger. Also, replacing two Mountain with two Castle Embereth pretty much seems like a free roll.

It's an old thread, but I appreciated the effort on the deck tech, so I thought I'd put in my thoughts.

So I've made some changes but I have "two" different versions with minor changes right now that I'm playing with to see if I prefer one over the other.

Firstly I removed all 3 Burning Prophet for 3 Chandra, Acolyte of Flame. I then replaced all 3 Chandra's Outrage with 3 Chandra's Pyrohelix. I replaced 4 Mountain with Castle Embereth, even though I only have 1 on paper I had 3 in Arena already. I then wanted to mess with lands a bit, and with Chandra's Pyrohelix being similar to Shock but 1 more cmc I removed 1 Shock for another land. This leaves me with 3 each of Shock and Chandra's Pyrohelix while retaining 3 Slaying Fire for when I need 4+ damage on a single target and all can be replayed from Chandra, Acolyte of Flame. So far it has run well, but only adding 1 land compared to before still keeps it a bit lean at 21.

Another iteration I'm looking at is to make the similar changes to above with the exception that I kept the Shock for 4x. I removed all 3 Slaying Fire to add another Torbran, Thane of Red Fell for 4x total and 2 mountains. This would leave me with just Shock and Chandra's Pyrohelix for burn spells, but if I am more likely to have Torbran, Thane of Red Fell then those burns spells jump up in damage as well to offset the fact I no longer have a higher damage burn spell. This brings the lands to 22 as well, decreasing the change of mana droughts to make sure I can play my cmc 3/4 creatures while emptying my hand of smaller creatures and burn spells towards mid game (hopefully with some Light Up the Stage for card advantage or Chandra, Acolyte of Flame to replay spells/make 1/1s)

Torbran, Thane of Red Fell is just too good not to be a four-of. It triples the damage from creatures and cavalcade. It's a high-priority target, so it'll get removed often, so you want four. You want to be drawing it as often as possible. Chandra's Pyrohelix seems like a good one here, as well. Chandra, Acolyte of Flame is a great one too.

You'll also need more than 20 lands. I don't care how low your curve is, 22 is a minimum. Maybe 23, with Torbran and how often you want to be double-spelling. Castle Embereth also needs to be a four-of. Activate it after the Cavalcade activations for extra damage.

With Mono-Red you can always play Blood Moon

In teh Landbase O would add Castle Embereth

Also, 1/2 copies of Castle Embereth and Castle Locthwain could go a long way.