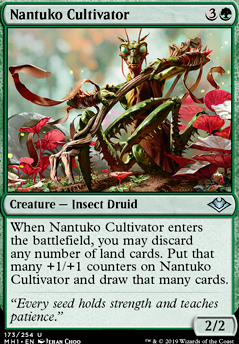 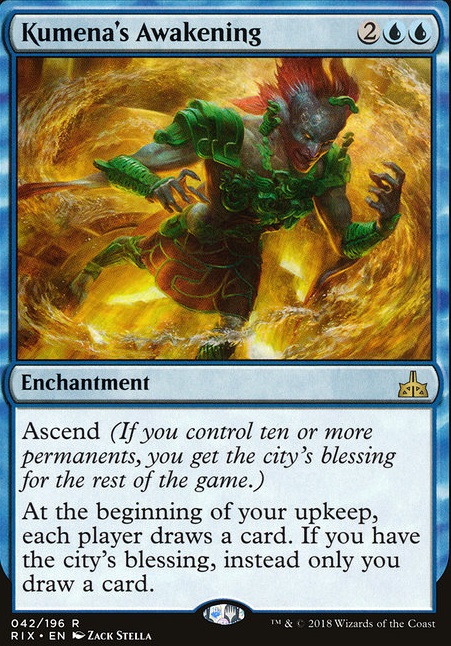 Tilling The Soil
by GamerBear

Really like this planeswalker but I think the theme is making it a little weak (plus I think you have too many creatures and lands in comparison with the other types but I don't know, never tested).

That's just the top of my head because I have been drafting mh1 recently and I thought of Oathbreaker/graveyard stuff.

That's so weird. You answered the exact same question for me semi-recently, and I can't find it. But glad to see the reminder about Urborg here. It's confusing at first glance, but once you realize it's potential it's a perfect mainstay here. I agree about Top. It's too good. Don't remove it until it gets banned again at some point hahha.

There is a new card that looks decent for the deck, but I'm not sure what it could potentially replace. Ayula's Influence . Thoughts? Maybe too slow, but seems pretty good. Also like Nantuko Cultivator .

Ill look at each one and look for a better version of that card. Alpha Authority could be swapped for one of the sowrds.

Heron's Grace Champion is not that good here at all, i think Ambush Viper is better here. Surprise block and kill and ramp cause your cmdr

Hoofprints of the Stag is a really bad card in this deck. Not good here. Spirit Bonds would serve great as a replacement.

Myth Unbound will be a wasted card slot in this deck. Your cdr is indestructable. Its not going back to the command zone often enough , it could be Cathars' Crusade or Glimpse of Nature

Nantuko Cultivator would be a lot cooler if it was comboed with Splendid Reclamation, change it for Arena Rector.

Primitive Etchings not that good. Pair it up with Abundance it becomes really good. Eather take it out or add support for this card

Prowler's Helm could be one of the swords

All Hail the Hypnotoad

I am currently building a Gitrog Commander Deck, and you have really good synergies in yours :)Drown in Filth and Nantuko Cultivator. I love THEM !Have you consider cards like Centaur Vinecrasher?You have lots of lands,50 , maybe can be good some ''play an additional land this turn. Here you have some guys: Sakura-Tribe Scout and Azusa, Lost but Seeking azusa is going to be reedited M25.Peace

Now, all of these are not perfect, and some will probably be easily vetoed but they all can function as good card draw in your deck. Well, besides insist, but that card is just nice to have.

I personally think you're really, really undervaluing artifact ramp. E.g., Sol Ring is almost universally considered the best card in edh (except perhaps Mana Crypt but that's $$$$). Yeah it can die, but the reason its so good is because it accelerates you by multiple turns, and is so cmc effective. A lot of artifact ramp is pretty inexpensive, so I'd urge you to try them out for yourself. Forgot to mention last time, but Xenagos, the Reveler is absurdly powerful in prossh decks as well.

Some cards that I think are weaker (focusing on 5+ cmc):

Chancellor of the Forge bad if you don't have lots of creatures, win more if you do.

Flayer of the Hatebound bad if you're not recurring creatures, win more if you do (you're already getting creatures back, the damage from flayer is unnecessary).

Overseer of the Damned is win-more all around-- killing their creatures puts you ahead, that 2/2 isn't going to matter.

Titania, Protector of Argoth you don't have ways to destroy your lands, so the value here is minimal.

Rapacious One is trying to be mana acceleration but makes you jump through hoops to get there, could just play acceleration directly instead.Nantuko Cultivator I'd be very surprised if you can afford to discard lands.

Thopter Assembly is slow and doesn't win you game even if you get to do the whole sequence. If a process is going to be slow, then you had better win for going through all the effort.

Golgari Thug I'm not sure what this is even trying to be? If you're looking for a dredger then grave-troll is the gold standard. If you're playing it for the effect then I think you can do better.