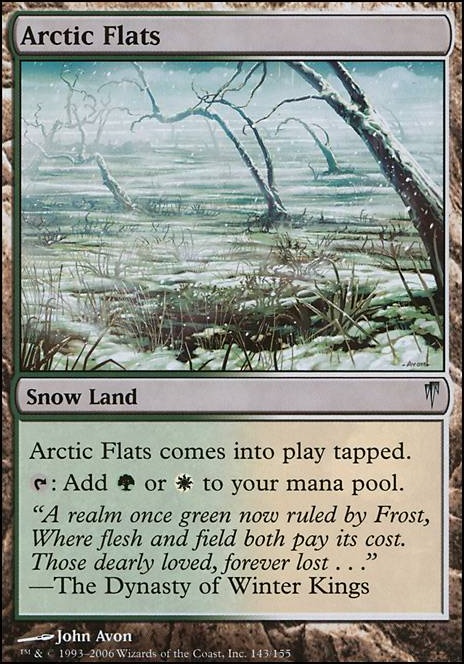 Let it Snow mark 2
by daxture

BMHKain on One Day until Throne of â¦

Why not play Boreal Shelf and Arctic Flats ?just one copy of each to get with into the north. It comes in tapped anyway i think it might be worth it

I love my cats deck! I know you have already seen my deck, WonderCats, but if I may make a few suggestions for yours? First off, I think the best thing you have changed is your mana-base: it looks pretty decent. Do you really own a Savannah? If so, good on you lol. Since you are only in 2 colors and have no Landfall, I would drop Terramorphic Expanse & Evolving Wilds, since in this deck Scattered Groves & Stirring Wildwood are "strictly better" (think about it.. even Blossoming Sands, Graypelt Refuge, Arctic Flats, Elfhame Palace, Selesnya Guildgate, & Grasslands are strictly better in this 2-color deck with no landfall/revolt triggers..). I really like Brushland, Sungrass Prairie, & Selesnya Sanctuary, too. I would also recommend Temple of the False God & Thran Dynamo since you have a lot of artifacts with colorless mana costs, though Gilded Lotus is good, too. Selesnya Signet & Sungrass Prairie can help filter the colorless to colored. Krosan Verge is terrible- at least go with Grasslands if you want that search for a non-basic, since it is free and the non-basic can come into play untapped (another "strictly better" situation). I would add Krosan Verge (which is essentially the same as Cultivate, & you already know how good that card is!), & another one of my favorite ramp spells: Skyshroud Claim! Notice how Skyshroud lets you bring in TWO non-basic lands.. UNTAPPED.. frikkin unreal ramp card. If you have even 3 colorless mana available, then Selesnya Signet basically costs one mana to give you ramp as well as make the other 2 mana colored. Pretty awesome early game- better than Rampant Growth, imo, though I don't run Rampant Growth myself. My last suggestion for mana-base is Strip Mine, mostly to get rid Maze of Ith, since it can be very annoying when running a Voltron strategy.

Okay- onto Instants/Sorceries.. why Condemn? With the "tuck" rules for Commanders now letting them go back to the Command Zone, why not simply run Swords to Plowshares? It is another "strictly better" case, imo. I feel Path to Exile is inferior to Swords to Plowshares in this format, but I do think even Path is still better than Condemn. Wing Shards & Crushing Vines are terrible, & Relic Crush isn't much better- Sundering Growth, Naturalize, & Nature's Claim are all good options.. & even better than those are Aura Shards & Krosan Grip. Rout & Divine Reckoning are ok, but I personally prefer Wrath of God, Catastrophe, & my pet favorite, Austere Command. The problem with Hunter's Prowess is that it costs 5-mana & is at sorcery speed.. I've found Hunter's Insight to be more useful in my own Voltron deck.

Enchantments: the Curses are kinda fun, but not effective enough to warrant a slot in an edh deck, imo. Something like Aura Shards or Sylvan Library or Greater Good or Asceticism or Duelist's Heritage has a much bigger impact on the game- & my biggest suggestion would be to add Sigarda's Aid! Amazingly broken card..

Equipment: Grappling Hook is good, but expensive- I exchanged it for Fireshrieker in my own deck & find it works better for me. Duelist's Heritage does much the same thing and is even better, imo. I LOVE Hammer of Nazahn, & if you have realized how amazing that free equip cost can be, then consider Sigarda's Aid! Add double-strike to either of those cards and then Bloodforged Battle-Axe becomes INSANE.. I have literally had 40+ Bloodforged Battle-Axes before, with 20-something equipped for free. Puresteel Paladin is obviously great, too. I think your Sword of War and Peace does as more harm than good- I personally cut both Sword of Feast and Famine & Sword of Light and Shadow from my own Arahbo deck due to the protection being a problem (not only because of the Eminence, but because of all the other cards in the 99 that target..). Sword of Fire and Ice avoids that problem in this deck, though, and is arguably the best of all the Swords. Umezawa's Jitte is INSANE. If it doesn't seem overpowered to you, then you have never played with or against it. Get something to have double-strike and it gets really crazy. Because of the shroud on Whispersilk Cloak, I personally prefer Prowler's Helm in my Arahbo build. I actually think it might benefit your deck more to cut some of the weaker equipment and add the ability to tutor for the better ones, ie- Stoneforge Mystic, Stonehewer Giant, Steelshaper's Gift, Open the Armory, etc.

Creatures- Dude, you cut Qasali Pridemage?!! He is one of the best Cats! He is basically a 3-mana destroy target artifact/enchantment that in this deck can swing for 6 damage on turn 3! Hungry Lynx & Arctic Nishoba are just plain bad, imo, & a lot of the other cats you have sit far too high on the mana-curve.. I would halve your 6-7 drops, tbh. Alms Collector under-performed for me, since drawing consecutive/additional cards isn't the same as drawing "two or more." Pride Sovereign is another under-performer that I cut, since we aren't going wide, but tall. A few MUST-have's that are missing are: Lost Leonin, Brimaz, King of Oreskos, Leonin Abunas, Mirri, Cat Warrior, & Skyhunter Skirmisher. I personally also really like Skyhunter Prowler, Chameleon Colossus (technically a cat!), Prowling Serpopard, Leonin Shikari. A few non-cats I really really like are Sun Titan, Stonehewer Giant, & Puresteel Paladin.

Anyways, hopefully I've given you some ideas.. Good Luck! I love my cats!

Arahbo, Roar of the World --- Cats

You have 20 artifacts, could benefit from Puresteel Paladin for Draw/Equip . Add Ancient Den and Tree of Tales to up your artifacts even more.

Sigarda's Aid would be a nice addition too, especially with Bloodforged Battle-Axe.

Adorned Pouncer is awesome, doubles the equipment power bonuses, can output some massive damage, double triggers like Bloodforged Battle-Axe, and he has build in recursion as a 4/4 double strike! Skyhunter Skirmisher to a lesser degree is good too.

Swords to Plowshares can be good control, or a nice lifegain if you need it (especially with a pumped up cat), cool with Felidar Sovereign. Path to Exile can be a good control, or a land fetch if your struggling with mana issues. Condemn is good, but it only gets attackers, often, the most dangerous creatures you want to remove don't attack.

Brimaz, King of Oreskos is nice for making tokens (on attack and block), but not a necessity.

Ajani, Caller of the Pride is a great double strike enabler, Lost Leonin seems like an auto-include with all that equipment for him to equip.

Lot's of ETB-Tapped lands in this build, can work on upgrading them ($$$ SUCKS), you can look at my deck for land ideas, but in general it's the most expensive component in building these decks.

You could look at abusing Healer of the Pride with an Aluren, Whitemane Lion or a Fleetfoot Panther any of those guys can go infinite life with her.

Temur Sabertooth has some infinite ETB interactions, but none that are that great.

You could Heroic Intervention into a Divine Reckoning or Rout, gives you protection from board wipe (including your equipment from a Vandalblast or similar others).

Rupture Spire needs to be gone into the shredder, never use that land. Like ever. Explosive Vegetation could be Kodama's Reach to bring your CMC down a bit.

You could pair down your artifacts/equipments and add more tutoring to consistently get the same "excellent" rated artifacts game after game, like Enlightened Tutor, Open the Armory, Stoneforge Mystic, Stonehewer Giant, Etc. Instead of Behemoth Sledge tutor a Loxodon Warhammer instead kind of deal.

These lands are just too slow Arctic Flats. If your having a mana issue, maybe try Birds of Paradise or putting some conditional check dual lands, or cheap pain lands like City of Brass / Mana Confluence for the time being.

Could use the same strategy on creatures, instead of a High CMC Nacatl War-Pride, Eladamri's Call a Nazahn, Revered Bladesmith and get a free Hammer of Nazahn and have all your equipments auto-equip for the same CMC.

It's a good deck, I think your on track, I would include Triumph of the Hordes as an alternate to damage win-con (against other infinite life decks anyway, or when you need to fast kill a Grixis or something fast).

Naya Burn Made to Beat my Friends & Handle Randoms

Alylio I'm glad you like it! And you too Sagarys, also I've added Volcanic Fallout to the maybeboard. If I find it necessary to keep up with the people at the local shop I'll pick it up, though I might just get it anyway for that AoE clear and remove the Searing Blood. BodhiQL the reason I'm running Arctic Flats is to keep my snow count high but you're right about tap-lands being meh in a burn deck. Thinking about dropping 2 Snow-Covered Mountain for 2 Razorverge Thicket to unlock a lot of turn two plays.

Naya Burn Made to Beat my Friends & Handle Randoms

There are so many better budget options for Arctic Flats. Sunpetal Grove and Canopy Vista can both enter untapped, which is far better than entering tapped. Temple of Plenty gives a decent benefit.