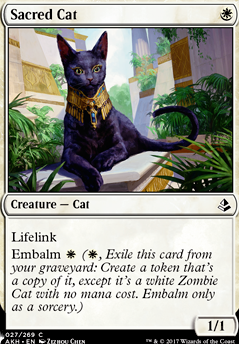 Embalm (, Exile this card from your graveyard: Create a token that's a copy of it, except it's a white Zombie Cat with no mana cost. Embalm only as a sorcery.) 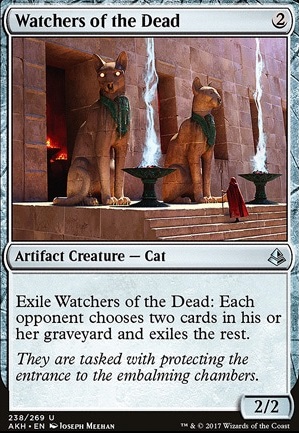 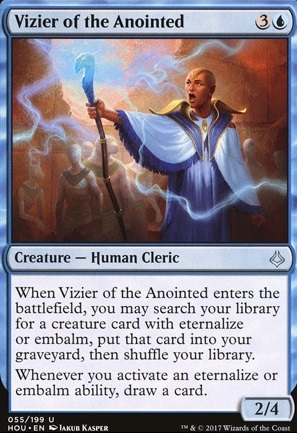 Well, if you're playing Cat Tribal, I guess Regal Caracal and King of the Pride are definetely a 4-of's.

Also, I don't really like Nylea's Emissary. I'd cut that for Sacred Cat maybe, it has a sweet sinergy with Ajani's Pridemate.

You could Settle the Wreckage yourself if you have a few Sacred Cat lurking around. Although, it would be very difficult to accomplish, not to mention the mana curve. Man! i wish that they re-introduced Path to Exile! That besides the former card is one of the few white ramp cards! I also recommend Oketra's Monument, as that is a ramp card.

Also, if you're looking for mana ramp, I would recommend using Path to Exile on your Sacred Cat! You can embalm it!

Sacred Cat is linking 4/4 Zombie Cat instead of 1/1 Zombie Cat. You can see an example here.

I'd run Hammer of Nazahn , since it can help you cheat on some of the rather heavy equip costs that your deck has.

I'd also recommend running some of the 1 mana cats, since these can give you a rather aggressive start. Sacred Cat especially is a great opening for the deck and can also be somewhat relevant later if you suit it up with equipments. Loam Lion is also decent. Adorned Pouncer is also really good for both early and late game. I'd probably switch out Pouncing Lynx for it.

If you can afford them, I'd totally run some of the "Sword ofs" ( Sword of Fire and Ice , Sword of Feast and Famine ), however they are quite pricey. I can recommend Sword of the Animist and Mask of Memory as budget replacements.