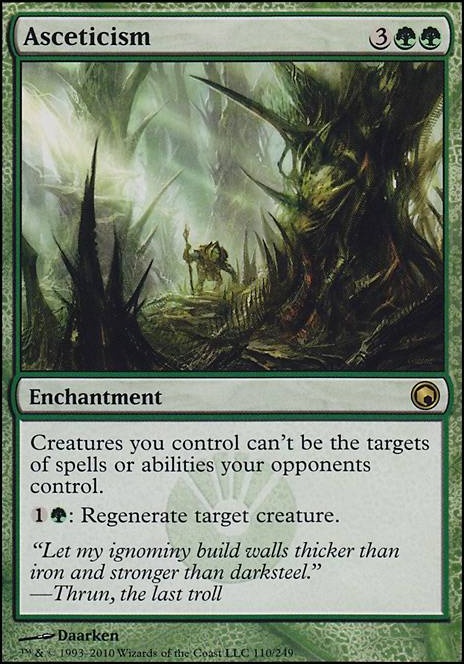 Creatures you control have hexproof. (They can't be the targets of spells or abilities your opponents control.)

A happy little stroll
by Mironar

I'm working on a couple of other partner mutate decks, but threw this one together because it was quick and easy.

I have the cards you suggested, but mostly locked up in other decks. Selfless Spirit, and Asceticism would absolutely be in the deck otherwise. Not having them in the deck doesn't bother me, though.

I like these commanders for a mutate deck! Ravos gets creatures that might have otherwise been removed from the graveyard into your hand so they can be mutated, and Tana brings the damage.

I see you have sac outlets in case you get hit with removal, but I think your creatures could use a bit more protection. Selfless Spirit, Heroic Intervention, and Rootborn Defenses are single use, but they all come in handy during a pinch. If not that, then you could go for Teferi's Protection. If single use isn't your speed, Asceticism is your hookup.

I think The Immortal Sun is a good fit here.

This honestly looks super fun and I'm glad someone thought of these two as mutate commanders. +1 from me!

Hey TraceT thanks for your feedback. It totally agree that i think the hand will often be empty pretty soon.

I wasnt sure about the Courser either, you might be right here. While building this deck i already thougt, that this card relies too heavily on extra land drop enablers to be super efficient.

I didnt actually play with Kadha yet. She has the same problem as courser, being more efficient with some kind of extra land drop per turn on the board. I might switch them to Constant Mists because i play that card in my Vial Smasher Brash Taunter deck and it did win me some almost lost games. Awesome card! For the Courser i will consider buying a copy of Asceticism.

What do you think about the amount of Ramp spells? Too much or is it a decent amount?

Hey TraceT thanks for your feedback. It totally agree that i think the hand will often be empty pretty soon.

I wasnt sure about the Courser either, you might be right here. While building this deck i already thougt, that this card relies too heavily on extra land drop enablers to be super efficient.

I didnt actually play with Kadha yet. She has the same problem as courser, being more efficient with some kind of extra land drop per turn on the board. I might switch them to Constant Mists because i play that card in my Vial Smasher Brash Taunter deck and it did win me some almost lost games. Awesome card! For the Courser i will consider buying a copy of Asceticism.

What do you think about the amount of Ramp spells? Too much or is it a decent amount?

Also I dont know if Radha, Heart of Keld and Courser of Kruphix are worth the slots in this deck. I think I would possibly add a haste enabler like Fires of Yavimaya or Hammer of Purphoros or possibly protection like Asceticism or Constant Mists I haven't taken the time to post my actual decks on here, but I have all three other Omnath decks. I've had the Omnath, Locus of Rage deck for about 5 years, and ran courser for a long time, and was just never thrilled with the performance. It gives too much information away for the amount of value it provides.

But as courser does add some level of card advantage, maybe some pure draw might be a good addition in its place as I could see this deck playing out its hand pretty often without Omnath, Locus of the Roil or Tatyova, Benthic Druid on the field.