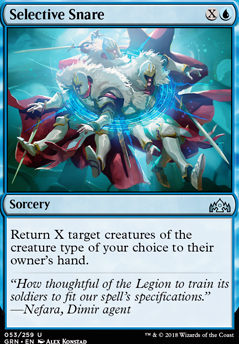 Return X target creatures of the creature type of your choice to their owner's hand. 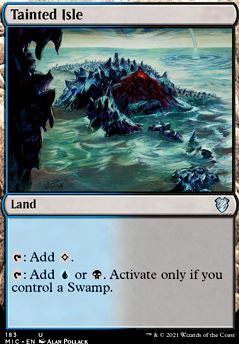 Also, if you want something to deal with Field of the Dead I would advise you to use Selective Snare , or maybe Flood of Tears

That costs 30 mana, with 8 slots -- If you can use white cards, you can replace Withdraw with Momentary Blink to save 3 mana (most of flashback cost paid with infinite colorless mana), or replace Withdraw with Ephemerate to save 7 mana (at the cost of a turn), or replace both Withdraw and Chain of Vapor with Ephemerate and Momentary Blink to save 9 mana (21 mana instead of 30) if Chain of Vapor isn't already generating 2+ mana with fast-mana artifacts ( Mana Vault and such). Other replacements for Withdraw include Saving Grasp , Selective Snare , Scapegoat . Only Scapegoat saves mana, just 1 -- use Chain first, then Scapegoat, saccing Spellseeker. But that's worse than Chain then Momentary Blink.

I'm sure there's a way to do this without Spellseeker, going Recruiter into Mistmeadow Witch , or Recruiter into Recruiter into Planar Guide , possibly using cards like Brago, King Eternal , Felidar Guardian / Flickerwisp , but I haven't worked those out yet. Maybe it's possible without blue.

The Last Hurrah of Ixalan(Lootfolk)

With so many strategies to do combat with it's been slow putting a sideboard together. So far I have a full set of Negate and 2x Sorcerous Spyglass . I considered Selective Snare but haven't come against any tribal decks worth being fearful of yet.