Whenever you cast your first instant spell each turn, if Kalamax, the Stormsire is tapped, copy that spell. You may choose new targets for the copy.

Whenever you copy an instant spell, put a +1/+1 counter on Kalamax. 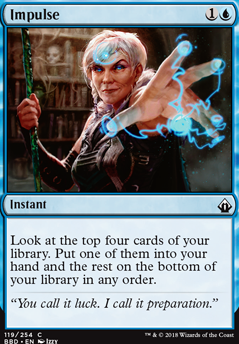 LetterLeach on What is "fair" magic?

my turn to chime in! and wow who knew "Fair" had so many definitions! i think its all about tempo, storm/ combo decks seem to be the most hated BUT its only a problem when you break your playgroups timing. if your group expects to play hours long games hitting turn 15-20 then a deck that perfectly combos on turn 2-3 will leave everyone feeling robbed but if you build a storm deck like i built Kalamax, the Stormsire and it takes you a while to win, peeps won't be upset, instead of thinking "What a bullshot combo!" they'll think "darn i shouldn't have let Kalamax get so many counters" or "well that's what happens when i ignore the storm deck after they rummage through a fourth their deck" it also helps if you are open about the strengths and weaknesses of your deck, a line i give for Kalimax would be "always block him even if you don't have any commander damage, and don't let him tap" that last line is in honor of one of our less competitive bruna players slapping some nothing enchantment on Kalamax and giving him vigilance because HOLY SHOT DID THAT FACK MY ENTIRE DECK SOMEHOW

First of all, thanks for your suggestions! Actually, I already had the Smuggler's Copter in the Deck, but I decided to cut it. For the direct tapping of Kalamax, the Stormsire , I already have the Cultivator's Caravan and the Survivors' Encampment . That should be enough, I think. I really appriciate suggestions!

Just to clear up a few other possible confusions, let's talk about what casting spells means.

So to clear up one other possible confusion, you can't play Lutri, the Spellchaser and copy an instant or sorcery card in your hand that you haven't cast. You can copy any instant or sorcery spell on the stack, regardless of whether it's a card or a copy.

You can also set up an infinite loop if you do it right, but it's a standard copy loop and Lutri only kicks it off. You need three things: an instant or sorcery, an instant or sorcery that copies it, and Lutri or something similar ( Ral, Storm Conduit etc) to copy the copy spell. You put the new copy on the stack copying the original copy spell, so it resolves to create another copy you can also target on the original as many times as you like. However, you don't generally increase the number of copies you make (when you end the loop, you still only copy your original spell twice), so you need something else (like Ral, Storm Conduit's triggered ability, Kalamax, the Stormsire 's second ability, or Twinning Staff ) to get any value from the infinite loop.

Of the examples you gave here, only the second one works, and it works without Lutri's help as described above. The first and last examples don't work because copies made by Lutri aren't "cast" and because the triggered ability only happens once. Release to the Wind doesn't work because by the time you can cast Lutri again, Release to the Wind is done resolving and has gone to your graveyard.

This looks super fun! I might need to mention it to my friend who plays Ghired, Conclave Exile . He's a bit of a red/green freak who isn't adverse to white, and the fun theme and broken plays might warm his Timmy heart! On the other hand, my other friend is tired of playing Kalamax, the Stormsire , and this might just be aggressive and interesting enough for him to take up next (he is looking for a new deck). If I ever build a Naya deck I might think about it as well!

KBK7101 Thanks so much! I've been plotting this for some time, so its great to finally finish it! I'm hoping to do a similar one for Scion of the Ur-Dragon next. As for Strixhaven, I would have thought that a set focused on wizards would certainly have something for Inalla. Yet it seems most of the Grixis wizards in the set are built around synergizing with instants and sorceries and not ETBs, which makes some of them very ideal for spellslinger decks like my Mizzix of the Izmagnus deck or my friend's Kalamax, the Stormsire deck, but less so for a wizards tribal deck. The recent card that I will almost certainly add (once I can figure out what to cut) is Pyre of Heroes from Kaldheim. This card will almost certainly be extraordinarily powerful here in both tutoring out our utility pieces and combos, so do expect an update with that one included soon.

I've been getting more and more into combo recently and decided to take a try at a Temur Kiki-Jiki, Mirror Breaker / Splinter Twin deck. This is try one with what I had lying around, and I got a few questions on how I should take the deck moving forwards.