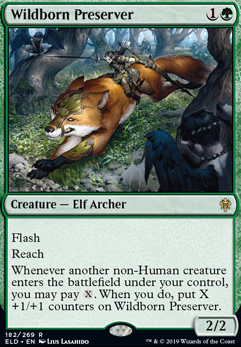 Whenever another non-Human creature enters the battlefield under your control, you may pay . When you do, put X +1/+1 counters on Wildborn Preserver.

Rise Of The Gelflings
by SefTheReject

Nice deck. Maybe consider Experiment One or Pelt Collector as alternatives to Servant of the Scale. Personally I prefer the cards since they can grow on their own, and experiment having built in protection is also nice. Another nice card might be Wildborn Preserver. Having flash makes it flexible, letting you hold up your command or formation, or even possibly Heroic Intervention if you want to include it, and still having a play if you donât need them. But the big thing is that it is a potentially great late game mana sink that might allow you to do a little better into longer games. Hope this is helpful.

Don't Be a Corpsejack Menace to Society...

Really nice deck. Maybe Pelt Collector or Experiment One might be worth considering, in particular over Servant of the Scale? The fact that they can grow as the game progresses makes them feel like theyâd be more relevant, especially in this deck. Wildborn Preserver might also be fun, especially with a potentially huge Gyre Sage providing huge amounts of mana. Adding these would make the deck more aggressive though, and Iâm not sure if thatâs where you want to take the deck. Looks really fun to play and I wish you luck with it in the future.

Really cool deck. What do you think of Wildborn Preserver? I think it might work well with both scales and CoCo, and can make reasonable use of your spare mana, so might be a more useful than Barkhide Troll? I also find the flash can be useful when most of your removal is also 2CMC.

I'd recommend altering your deck's hubs - for whatever reason, Birthing Pod is one of them.

I'd highly recommend making your deck 60 cards, cutting down on a lot of creatures (30 is a ton for Modern decks!), and instead increase the number of lands (23-25) and put in a whole ton of mana ramp. Spells with X really need large values of X to pay off. In terms of creatures to cut, I'd start with Endless One since it's just a vanilla creatures, Genesis Hydra since you're very likely to only hit creatures with X (and the creature will come into play with 0 counters if it's put into play this way), and possibly Wildborn Preserver since you'll constantly have to strike a balance with your mana between the creature you're casting and the Preserver. I'd also cut Nourishing Shoal as life gain doesn't really do that much if you're behind on board (other than delay the inevitable).

I'd recommend Arbor Elf along with Utopia Sprawl, Castle Garenbrig, and even possibly Llanowar Elves, Rampant Growth, and Cultivate for mana ramp. Hardened Scales, Winding Constrictor, and Metallic Mimic are all efficient cards that make your X creatures bigger pretty much for free. Walking Ballista is also one of the best X spells in Modern...if your budget can afford it. For your sideboard, definitely Veil of Summer, it's exactly what you need to protect all your creatures from Fatal Push.

Honestly, this deck reminds me a lot of the Hardened Scales decks floating around Modern. I'd recommend taking a look at those decks as I think you'd find them fun!

Fun list! The only suggestion I have is to run two copies of Return of the Wildspeaker probably in the place of a couple icons. Multiple icons can have diminishing returns and the Return of the Wildspeaker will either draw you lots of gas or just close the game as your finisher. I also run a playset of Wildborn Preserver it isn't a goblin but it has been so good for me that it's worth it. A two drop that unanswered will take over the game, but usually eats removal sparing my Grumgully or Krenko? Four of for me please lol. Good luck to you fellow goblin lover!