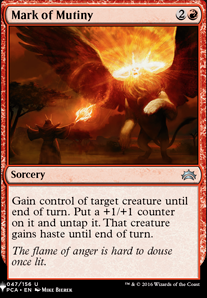 Mark of Mutiny occurrence in decks from the last year

About Bazaar Trader , in fact it make me keep the control of the creature stolen with Claim the Firstborn / Act of Treason / Mark of Mutiny , so yeah its a good fit in there!