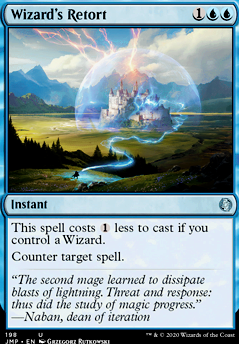 Jalira and Her Monsters
by Jinxx

Consider Wizard's Retort , you will most likely have a wizard on the field, and itâll only cost a cheap 2 blue mana for a counter for any spell. Primal Amulet Â Flip decreases mana costs, same goes for God-Eternal Kefnet . Expedite is a really good value card. Lithoform Engine is also great. Only downside would be the mana you would have to invest into it.

hejtmane thank you, building decks is my favorite part of Magic. I tried to keep the power level down a bit, for example I have Wizard's Retort over Counterspell because Counterspell on Isochron Scepter I feel would suck all the fun out for the kids.

Cool deck!!
Memnarch is dope.
Forsaken Monument also goes inf w basalt monolith and is useful generally.
I like Tezzeret the Seeker to fetch your Sol Ring or Mana Crypt ... wait. Where's your sol ring!!!!
Also would run Arcane Denial , Swan Song , Delay , Disallow , Dissipate , or Wizard's Retort over cancel. Anything but cancel!
Also High Tide is nice but if you run this or Caged Sun i would cut the urzas land and command tower in favor of islands. is just soo good. No need to mess with urzas lands unless you have dedicated land tutors like Tolaria West .
Just some thoughts, cheers and have fun!!

So what's your plan for game 2? A control deck will have an easy time with this deck, especially Esper, Dimir, or Azorius. Sure, random counterspells will work, but your creatures are going to be useless while they're On Thin Ice. Or Murdered. Or simply countered by Wizard's Retort. Or really any 3 CMC counterspells. Strangely this Aggro deck's weakness is Control Decks... at least ones that have access to spells that clean up any stragglers.

Nice, really like the interactions between the cheap changelings and cost reduction from the party mechanic. Have you considered the cheaper "wizard" spells from Dominaria (Wizard's Retort/Wizard's Lightning)? Raiders' Spoils could also help refill your hand a bit in the mid game. Hope this helps.