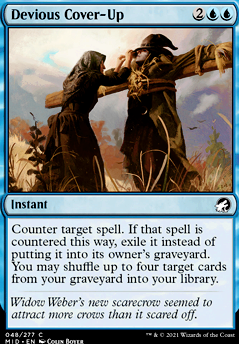 Counter target spell. If that spell is countered via this ability, exile it instead of putting it into its owner's graveyard. You my shuffle up to four target cards from your graveyard into your library.

Dredge4life, you will see that I integrated many of your suggestions, especially the recommendation for more mana rocks and See Beyond to tuck a combo piece, if drawn. I wish there were more, better tuckers, but I've included Devious Cover-Up as a multifunction 'tucker' in case milled. I especially agree with narrowing down the win to Leveller and Thassa's Oracle. It is much faster and more competative. In my playtesting, waiting for 3 drakes before attempting to combo off was far too slow. Thank you so much!

vitamintuna, you will see that I also integrated many of your suggestions, especially those for card draw and mana acceleration. I still can't afford Pongify and things of that nature in this list due to a $75 budget. Most importantly, I concede that Mystical Tutor isn't appropriate for what else I could spend the budget on. Long-Term Plans, multiple mana rockas, and Dig Through Time are money better spent for the win. Thank you so much!

In actuality, with both of your advice, this deck has become pretty brutal. for less than $75 it holds its own at a competitive table, which was the goal. I have seen it many, many times, already. It is oppressive in 1v1 as well--which is to be expected.

This deck is extremely effective.