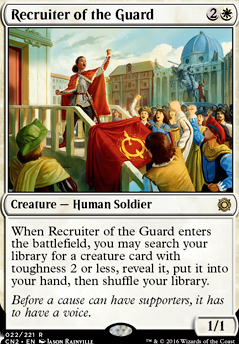 When Recruiter of the Guard enters the battlefield, you may search your library for a creature card with toughness 2 or less, reveal it, put it into your hand, then shuffle your library.

Recruiter of the Guard occurrence in decks from the last year

Recruiter of the Guard Discussion

Weirdly for Alesha, the deck can get a ton of free value from this combo outside of winning. Filling the yard, digging, Stoneforge Mystic, Imperial Recruiter, Recruiter of the Guard, Goblin Engineer, Goblin Welder, etc. Not to mention the black tutors that aren't on bodies that can be reanimated or Nim Deathmantled. Seems really strong!

SynergyBuild on Should Tutors Have Additional Effects?

I mean, Recruiter of the Guard, Spellseeker, etc. all work well!

That is actually hilarious, though the next two cards I'm planning to add to this deck are Recruiter of the Guard and Thunderkin Awakener. On the chopping block is Oversold Cemetery, it doesn't play particularly well in this deck. Other than that I am not sure what else to cut. Maybe a land? But I hate doing that.

If you find yourself wanting more token makers, Vanguard of Brimaz is another option. You could also run tutors to find them like Recruiter of the Guard and Imperial Recruiter.

Additionally, Feather is a very mana-hungry commander. Because of that, I recommend you up your land count to 38 lands. You need to consistently make your land drop every single turn with this deck, so you need to have a healthy land count.

Now besides those, I've just got a few tips when it comes to building a Feather deck. Many Feather decks run into the problem of wanting to do too much. You said you want your build to be the token build with Voltron as a back-up. I think that's great. I see you running cards like Iroas, God of Victory and Elesh Norn, Grand Cenobite that support the token theme that I don't see others run in Feather decks, so kudos to you for those. With that in mind, you might want to reconsider running the burn cards you currently have since they don't support tokens nor board-wipes.

Okay, let me get into important pieces of Feather decks. Feather is a powerful commander, but she has one serious flaw- if she's not on board, your deck falls apart very quickly. When she is out the cards in your deck as incredible, when she's not they're quite bad. Your deck relies almost entirely on synergy, so you need to make sure you protect Feather. With that in mind, figure out how many low-cost protection spells that target you need to consistently protect Feather. Basically, enough so that you always have a way to protect Feather when you play her.

Now, as far as ramp goes, I find you really want your ramp to be two-mana and be able to produce colored mana. This way, you can play Feather on turn 3 with one mana open to protect her.

You've got a solid list already, I think the suggestions and some thoughtful consideration on your part can make it even better.