When Stormbreath Dragon becomes monstrous, it deals damage to each opponent equal to the number of cards in that player's hand.

Stormbreath Dragon occurrence in decks from the last year 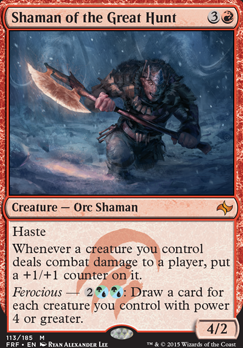 capriom85 on RG vs RUG

Magnanimous, Kiora, Behemoth Beckoner is the idea for card draw and also the ramping ability. Imagine T1 mana dork, T2 Kiora uncapping land to hold up Stubborn Denial or Shock mana. T3 sees a 4-5 drop creature. I am looking at Glorybringer or Stormbreath Dragon here, drawing me a card, getting 4 damage in, and possibly killing off a creature.

triproberts12, true. I think the Stubby D addition may be worth it.

The bolt thing fills a slot similar to a singleton of spell snare in blue decks, not in quantity large enough to be consistent turn 1 draws or hands, but can alter the tempo of a game in narrow but crucial scenarios (turn 1 infect plays, swiftspears, or mirror). But you do make some good points that the lack of consistency leaves a bit to be desired in today's pace and meta.

As far as Snow goes I was referring to the prevalence of more snow-basics being implemented into decks as well as the rise of astrolabe. Both have caused Blood Moon to diminish its returns as a four of, backing up what you said. I play Snow-Bant in paper and run blood moons in the board for example.

I think playing to your local meta is crucial if you want the deck to be competitive. Lot of Tron? Bring 4 moons. Lot of white? Sneak a Stormbreath Dragon into the main or side. Lots of astrolabe? Give Abrade or Ancient Grudge a try. I am forever changing this deck, since its a tier 2 it needs constant tuning against tier 1s. For example, I use to run Obstinate Baloth out of the side board when Jund was big with Lilly and KC, but it has no place in the current meta, instead i run 4 Leyline of the Void these days and lots of Veil of Summer.

I like the idea of the deck, but I would personally play it more control-based. if I had to add some sort of ramp I'd definitely go for Sylvan Caryatid and rather than duo lands I'd use more fetch lands. I may discredit myself completely here but... Evolving Wilds . Also dropping an island for Sarkhan Unbroken is an alternative. Sarkhan the Masterless is also a good card against aggro once you start having some board pressence, and tons of removals and board wipes. Languish if you have big enough dragons is a good option for removal. Also I'd reduce the number of dragons, With 3 Stormbreath Dragon , a full playset of Thunderbreak Regent and some huge threat like Atarka, World Render . Once you drop Atarka and have 2 dragons in play you win.

Stormbreath Dragon is less about the monstrosity and more about the protection from white, particularly against Path to Exile . It may cost one more but you'll get the same amount of damage out of it and less mana investment in the long run.