Whenever a player casts an instant or sorcery spell that targets only Mirrorwing Dragon, that player copies that spell for each other creature he or she controls that the spell could target. Each copy targets a different one of those creatures.

Feather's chance for glory
by slamstar 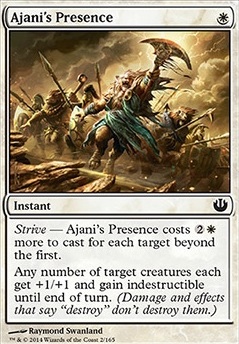 NoSoyYucateco Okay this is a better idea of what I'm thinking. If there are any suggestions you mentioned that I didn't address. my apologies. It's been a long week haha. I need to cut 8 cards. That being said, I am concerned about my removal, draw, ramp balance. And if possible, I'd like to try and work in any combination of Woodfall Primus, Brutalizer Exarch, and Avenger of Zendikar. Right now, I have Seedborn Muse in there and wanted to get your opinion on it. My thought was to get multiple uses out of Mimic Vat and Kiki-Jiki, Mirror Breaker in a single turn cycle, but now that I'm thinking about it, that might not be such a good use of a slot. Mirrorwing Dragon is in there, but I might sideboard it. It just seemed like a neat idea to target it with Cackling Counterpart or Twinflame, lol.

Mirrorwing Dragon has been banished to the world of redeemed angels and is replaced by Terror of the Peaks. While making this change, I also decided to swap in Grim Tutor for Vivien's Arkbow. Adding a win condition and another tutor brings more power to the 99 than leaving Mirrorwing Dragon and Vivien's Arkbow in the deck list.

Oh. Yes. That does not work. Thank you for bringing this oversight to my attention. I totally missed that. Hmmm, Mirrorwing Dragon suddenly does not seem as good in this deck. Replacement on the way!

Unfortunately, mechanics like heroic don't actually trigger from Zada's ability because you only copy the spell, not cast it. This means Akroan Crusader won't be able to trigger. The same thing goes for Mirrorwing Dragon, unless you just want it to serve as a second copy of Zada ... Also, depending on the speed at which you want the deck to operate, you might consider adding a little more ramp like Mind Stone or Arcane Signet (though the second might be outside your budget range).

Omniscience_is_life on what is everyone's opinion on ...

Once more, Iâm not claiming to know more here, but that subtle difference seems to be a downfall in the Ink-Treader Nephilim-Mirrorwing Dragon case, as for one a single Murder is a board wipe for all, but for the other itâs a one-sided one, where the player whose cards are wiped is the active player of the Murder. Seems abusable.