When Hoarding Dragon enters the battlefield, you may search your library for an artifact card, exile it, then shuffle your library.

When Hoarding Dragon is put into a graveyard from the battlefield, you may put the exiled card into its owner's hand.

Hoarding Dragon occurrence in decks from the last year 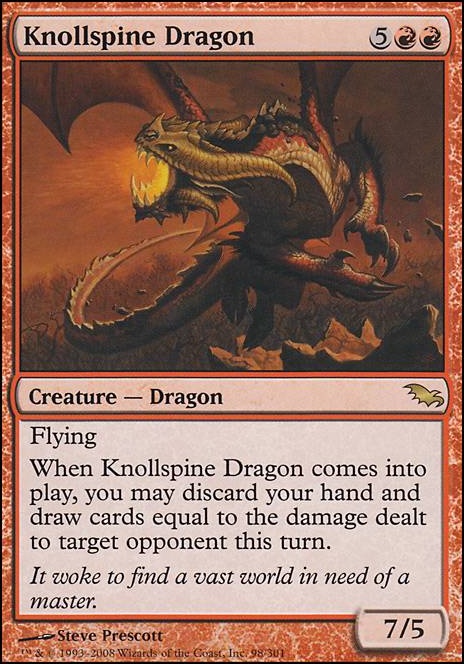 I Throw Things
by Gracco

DarkHero on Mezifel, Angel of Bloodshed

So, you've got a 4/4, with flying lifelink and deathtouch, for 3cmc in RWB, already a monster

They want "test the color pie" and âexile mattersâ. I noticed you said a white card, do they care that it is multi-colored?

Your giving your opponents an opportunity to exile cards to prevent combat damage, which is risky because they are allowing you the opportunity to cast their shit from exile.

What would a deck featuring this look like? You would have your typical exile target creature ect. but you could also have Necropotence and get full use of your cards that are exiled. Theater of Horrors, Lukka, Coppercoat Outcast, flicker Hoarding Dragon, You can even use cascade to cast something it wouldn't normally hit on while your searching for something with less cmc. Spinerock Knoll and the rest can be popped early. Tons of ways to get use out of this.

I put in Hoarding Dragon and removed Hoofprints of the Stag for a Staff of Domination. Thanks for the tips! I'm still working on tweaking it.

Hoarding Dragon would allow you to search for your artifacts for combos.
and Luminarch Ascension is an upgrade over Hoofprints of the Stag

Honesty not sure if this is a good add (very hit or miss) but I think that knowing of its existence is nice... Mindclaw Shaman.

I guess if you are holding Dualcaster Mage for someone else's spells then that's fine but if not maybe you would play Wort, the Raidmother because she could be better (and makes tokens!).

Hoarding Dragon is an excellent tutor for an artifact like Sundial of the Infinite as long as he isn't exiled.

Lastly, Izoni, Thousand-Eyed will generate a ton of tokens (you have 40+ creatures in your deck) and can be a ok sac outlet.

Hope you found these suggestions insightful! +1

I'm gonna offer some constructive criticism. It's just my opinion, and I haven't played Purphoros (just Feldon), so if I'm wrong I'm wrong. Eldrazi are really strong in Feldon, so it would make sense that they would be strong in Purphoros if it can be pulled off. But it's just so hard to pull it off. 2 cards pull it off. They are Painter's Servant and the good old Sneak Attack . The only tutors that can get those are Gamble , which is a gamble, and Imperial Recruiter , but only for the painter. Attacking with any eldrazi with annihilator is great, but honestly, Ulamog, the Ceaseless Hunger doesn't seem that great with only his attack trigger, and just once before he dies as well. And he can be chump blocked. Casting eldrazi is also an option, but the deck lacks sufficient ramp to get to double digits very quickly, giving the rest of the table time to weather the cards by the time they come out. These cards become ridiculously powerful with Feldon of the Third Path or Mimic Vat out. Goblin Engineer and Hoarding Dragon can tutor mimic vat. But all of this coming together with not enough tutors may be more frustratingly difficult than it is optimistically possible. I don't know if the payoff is worth the risk since I'm not familiar with the deck. I could just be wrong, but that's my ten cents worth.

On another note, you should totally add Hoarding Dragon . You have so many useful artifacts to tutor up from Mimic Vat , to a boardwipe, to ramp, etc. I would take out Magnetic Theft . It can be useful as a combat trick, assuming someone is using lots of equipment, but it doesn't actually steal the equipment. When the owner's turn comes around, they'll just equip it again to their creature (since equip is sorcery speed). It doesn't get you any card advantage, which is the name of the game in Commander, and is also one of Purphoros's biggest weak points.