Whenever an opponent attacks you and/or a planeswalker you control with two or more creatures, draw a card.

Mangara the Draw Engine
by Kream45

Mangara, The Diplomat EDH
by Oldcrow80

I Want to Speak to Your Mangara
by Jaxun 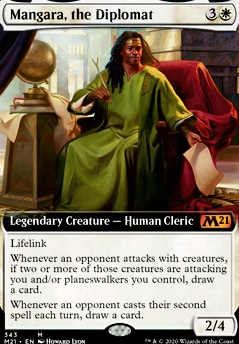 There Can Only Be One
by free-kolja

I am in the process of building Feather and I am considering Silent Arbiter Magus of the Moat Aurification Mangara, the Diplomat and some other tech to discourage ops from swinging wide. Have you run any smiliar cards, and if so what was your experience with them? I was also plan on running Backdraft Hellkite. The mirrorwing looks a lot stronger since it can do something the turn it comes into play, but I wonder how many creatures I will actually have on the battefield and whether it will be as effective as it looks at first glance. Any thoughts?

Hey griffstick! I'm currently making a Iroas Deck based on yours, and I can't help but recommend this:

Fireflux Squad: seeing how we've got quite the "on attack" effects, this guy really helps to put your big creatures on the field (for free, I might add) and get their effects right away! You have to exile a creature for it, but if you've got your tokens going just exile one of them, it's no downside at all!

Mangara, the Diplomat: good card advantage, opponents will think twice before going off with spells/attacking you with mass armies!

Shadowspear: amazing equipment, +1/+1 lifelink + trample, and it has anti-board protection for just 1 MANA?! Strongly suggest this one.

Embercleave: if you already have some creatures going and Iroas is unblocked, flashing this on for a whopping 16 commander damage for ONLY 2 MANA? INSANE! Even if they so desire to block Iroas, it also gives trample! It will hurt! Not to mention it gives you 2 red mana devotion!

As to what I think is best to remove for these:

Argentum Armor: the effect is nice and +6/+6 is dangerous, but the cost is too high and it might come too late to be useful.

Hero of Oxid Ridge: the effect is really good to deal with all the 1/1 blocks that could slow down your victory, but it seems like an overkill considering Iroas' menace.

Wheel of Fate: while gaining a fresh hand to go off is nice and all, having your opponents do the same might actually hinder your plans. As chaotic as this card can be, there's enough draw power in the deck, and I see this is kinda slow.

Basilisk Collar: considering most of the time you will be abusing Iroas' Indestructability, most equipped items go on him, and having deathtouch on him is not that much useful, since people either won't want to block it anyways or he's strong enough to kill most creatures thrown to block him. As great as this can be on other creatures as well, when you attack with them and Iroas is out, they also don't take damage, meaning they generally won't be blocked. All of this makes deathtouch kinda underpowered. Lifelink won't be a lost trait if you swap it with Shadowspear, and it costs the same! (Also, trample is nice!)

These are my suggestions, hope you like it! Always looking for updates on this deck of yours, I love Boros.

Crow-Umbra i chose Mangara, the Diplomat because i play in a spell slinger heavy meta :) I actually wanna play more of a toolbox version with an aristocrats or Purphoros, God of the Forge finish and dealing small amounts of damage every time, but also wanna oneshot some ome with Master of Cruelties if this player does to much shenanigans :)

Heartwood Storyteller. Mangara, the Diplomat does a similar thing for you and only you but I've been aching to make this bizarre sort of punishing politics deck, partway between group hug, group slug, and chaos!

After reading your comment I have to agree about the ramp and land count, having ramp on two mana just gets in the way of the curve to play our non-humans. I figure maybe the one and zero mana ramp may still be good since they could potentially get us Wintota out with some tokens on turn 3 instead of 4 with a curve of t1-ramp, t2-non-humans, t3-commander.

Do you have any suggestions for other ways to get card advantage? I do have a couple of ways like Wheel of Fortune, Mentor of the Meek, and Mangara, the Diplomat, but only three is not very much. I've tried to cover for this with a lot of protection to help us keep the glass alive.

Got a Vito in my prize pool too.

Its crazy that Verge Rangers and Mangara, the Diplomat are cards now