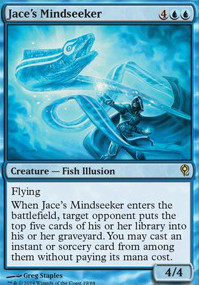 Flying When Jace's Mindseeker enters the battlefield, target opponent puts the top five cards of his or her library into his or her graveyard. You may cast an instant or sorcery card from among them without paying its mana cost.

Jace's Mindseeker occurrence in decks from the last year

I LOVE this deck strategy, and there's a lot of cards that can support it (it's also super fun in commander). You are in red so if you want to go the Traitorous Blood , Hijack , etc. route, you easily can.

First thing that comes to mind of though is Knowledge Pool . Absolute sh*tstorm every time, so much fun.

In blue, there's also a bunch of cards like Bribery , Jace's Mindseeker , and Sphinx Ambassador that you could add. Blue of course has a bunch of cloning. I see you're not running Vizier of Many Faces .

Besides the aforementioned one turn steals like Hijack , red has things like Stolen Strategy , and Etali, Primal Storm .

There are also some artifacts that come to mind besides Knowledge Pool , such as Vedalken Shackles , Chaos Wand , and Grinning Totem .

Lastly, you have a bunch of other things thrown in here that don't follow this game plan (but do follow the game plan of your commander well). Things like Tatyova, Benthic Druid . I'm thinking you should make this specific deck less of a Stealing Deck, and just make it a better Kynaios and Tiro of Meletis deck. Then take all your Stealing cards and pick a different commander for that deck strategy (because it does sound super fun).

Some options for different commanders could be: Show

This is all off the top of my head, but I hope you get some help from it.

It's us again; spreading the love for your budget decks. Here's some more budget options that we're using in our Brago deck:

Hope this helped a bit. Cya!

Ashen Rider is a great card to blink but a little costly, Conjurer's Closet is another good one, I also run Venser, the Sojourner , Jace's Mindseeker , and Magister Sphinx is also good.

Oath of Teferi , Venser, the Sojourner , Noxious Gearhulk , Ashen Rider , Angel of Despair , I am personally a big fan of Gonti, Lord of Luxury , Jace's Mindseeker is decent, Conjurer's Closet for sure... maybe Jace, Unraveler of Secrets for top manipulation.

I have made the following cuts:

These are just preliminary cuts and adds. I see a lot more cards I want to put in the deck from your suggestions, but I am not sure what cards to cut for at least some of the following:

Day of dragons looks awesome do you think Synthetic Destiny would be a worthy include as well?

I don't have a specific outlet for the Peregrine Drake combo but both cards are super powerful in blink and getting infinte mana is always helpful:) Do you think I should work some outlets in for the possibilty of comboing off or is it not worth it?

Thanks again for all your help:)

You can go aggro control. Most of the creatures do hurt (5 power) with effective etb effect/s. Flickering them reuses their etb and give pseudo vigilance.

I will raise a disclaimer that esper tends to run "good stuff" because, well, there are good spells that have little to no alternates.

Sepulchral Primordial -> another good one, getting creatures in opponents' gy

Vela the Night-Clad -> could be a win con, when you flicker enough

Sun Titan -> not sure if you have many 3cmc permanents, but usually great to have

Chancellor of the Spires