At the beginning of your upkeep, you gain X life and draw X cards, where X is the number of permanents you own that your opponents control.

Zedruu the Greathearted occurrence in decks from the last year 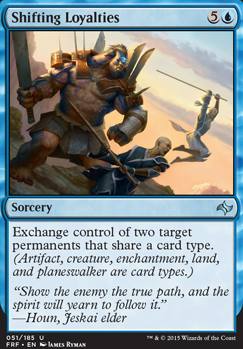 Zedruu the Greathearted
by moroz

Curse of the Pilgrim
by Sporkfu43

Whenever an opponent plays an Armageddon and it resolves, suddenly the game gets really interesting, really fast. You have to count out how much mana you have left, if any, and decide how to use the resources you already have out to manage a board state. Politics comes in big, because if you had a bunch of setup but didn't lay out your plan, you might not get to, and could get steamrolled by someone that had their plan out on the field.

Aiming to align yourself with the best players, rebuild as fast as possible, and not get targetted in the new landscape where what's in hand is often stranded becomes really useful.

I also love decks based around copying/stealing your opponents cards. They are always powerful, but never super powerful because they play with their opponent's cards! You can run them anywhere, and it's really fun!

I hear similar stories about other cards, whether they are political, like most monarch cards, or certain decks that aim to bring a new style of game to the table, like with Zedruu the Greathearted or Pramikon, Sky Rampart

All of these cards can be awful or fun to play, but personally I find them most fun to play against. What do you all like playing against? Any cards? Any decks?

Essentially, win the game for 6 mana.

KorandAngels Yes! Derevi is a female!

I am unsure if you knew this, but Zedruu the Greathearted is also female.

DerektheRed on Ideas for a Kynaios and â¦

@king-saproling: I feel misguided w/ this CHAOS Commander. I actually wanted some suggestions on what you'd think is a better CHAOS CMDR; & what to suggest in there.

Unless you want me to change Color Identity, All I can think of is Okaun, Eye of Chaos & Zndrsplt, Eye of Wisdom . But does it have to be all Coinflip & nothing more?

The best I got is either Yidris, Maelstrom Wielder , any 5-Color that's not Karona, False God , or The First Sliver . BTW, Zedruu the Greathearted might be a possible Group Hug CMDR of Mine; but there are others gambiting for this role Including One King... & Two Rulers of a Major Theros Area...

I can't decide which to choose; though I'm on the Bend for Yidris again, or even Jodah, Archmage Eternal ; both of which suits my needs, but even I'd like to find the right balance of CHAOS for the 99. That said, I'd rather have my CHAOS both Not only Just Right, but also strong enough to end the opinion that they're just casual trash.

Dr Volrath will see you now.

oh you actually just gave me an idea on what to do with my Mindslaver!!

-> IÂ´m gonna put that sucker into my Zedruu the Greathearted deck, and then gift it to one of my opponents and watch them tear each other apart hahaha :D

Zedruu the Greathearted lets you share your food with everyone!