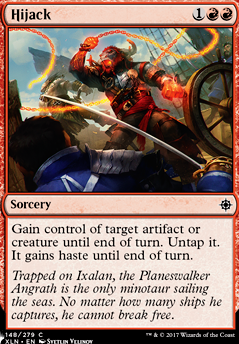 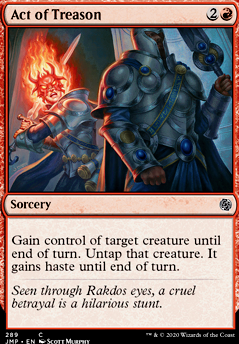 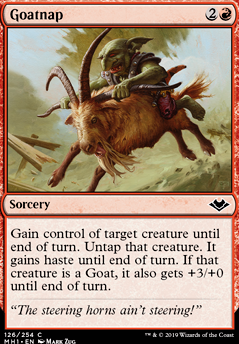 30EU Challenge - The Best Things In Life Are Free
by Heretik82 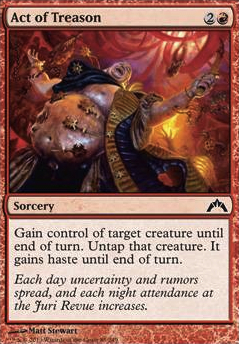 Also Kari Zev's Expertise is a better version of Hijack

I remembered Ray of Command as the only temporary mind control effect at common and instant speed and how temporary mind control effects shifted to red and sorcery speed over time, e.g Hijack . So I decided to give it a drawback and make it more expensive to balance it for instant speed. The drawback can be turned into an advantage with a bit of buildaround (ETBs) and still fits the effect of the card thematically and is on color, compare it to Teferi's Time Twist for reference. Don't forget, if this spell gets countered, your creature is gone.

I chose Hijack mainly because it fits with Angrath, but also because it takes artifacts. A lot of infinite combos that I run into use an artifact as one of their core pieces. Being able to shut that down by taking them is useful. Mana rocks like Dreamstone Hedron and Hedron Archive are pretty common, and make great targets to take and sacrifice. I hadn't considered Kari Zev's Expertise , but it could definitely make it into the deck.