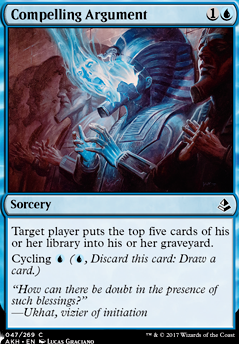 Target player puts the top five cards of his or her library into his or her graveyard.

Its Milling Time
by stebogoalie55

Phenax Mill (how original)
by zteam

I like Compelling Argument because I find the ability to dig for the key enchantments super useful. The deck has a huge a/b problem where the mill spells just can't get there fast enough alone and need the support. No problem about the black mana; I keep removing this from the dimir hub and getting re-added.

Mind Sculpt or Breaking / Entering is better for mill with the same CMC as Compelling Argument unless you want the ability to Cycle.

Mirko Vosk, Mind Drinker is Far too slow. I'd drop the Startled Awake  Flips, the Traumatize s are wayyy to slow. How about Compelling Argument and Tome Scour instead. A full four Into the Story is crucial to refill your hand, and maybe a single copy of Treasure Cruise or Dig Through Time is worth it here? Fatal Push is definitely worth it here. Mind Grind is kinda weird. It doesn't tend to work as well as you think it will. Consuming Aberration is not the card for this deck. I'd add in some sweepers, maybe 3 Languish ?

Milling in the Name of

You might look into Compelling Argument and Thought Collapse as well. I currently play a similar version and just started running Ghostly Flicker for extra Cancrix triggers. Definitely fun when you get multiples into play.