At the beginning of your upkeep, choose one â

Triskaidekaphobia occurrence in decks from the last year 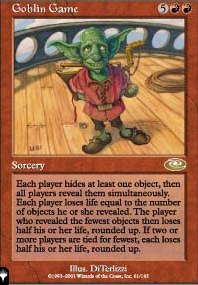 K'rrik - I put the pay in pain
by Steamboy

Why can't we be friends
by MopeyIzzle

FormOverFunction on What is your favorite card ...

I like cards that effect everyone (relatively) uniformly; like Havoc Festival, Copper Tablet, Thought Prison, and Triskaidekaphobia. The trouble is they generally end up killing me more often than my opponents ;P

Pulling off a Global Ruin in my wubrg natural disaster deck, with five lands remaining? Thatâs the best.

Hello fellow Selenia fan, here's my Selenia Deck if you'd like to swap ideas. I like the inclusion of Bolas's Citadel here. Have you considered Tree of Perdition & Triskaidekaphobia? Great bit of tech considering you can alter your life total at will. Also Crush Contraband is good in place of RtD or in addition (nix Dispell maybe?). Another good bit of tech (budget dependant) is Vedalken Orrery considering alot of spells of ours are sorcery. It also allows you to Flash in Selenia when you have your pieces ready. Hope it helps some, +1 from me.