Creatures you control have deathtouch.

Creatures your opponents control lose deathtouch and can't have or gain deathtouch.

Archetype of Finality occurrence in decks from the last year 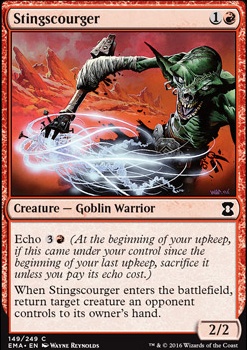 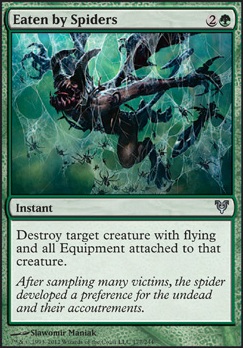 Cool deck, Iâm partial to Golgari myself and find the idea of a deathtouch deck interesting.

You might want to look at Vraska, Swarm's Eminence, the uncommon from WAR. Her passive ability is that whenever one of your creatures with deathtouch damages a player or planeswalker, it gets a +1/+1 counter. Her minus creates deathtouch assassin tokens.

Also, Acidic Slime is a deathtoucher with an ETB removal effect stapled on it. It was reprinted in C20 so it should be easy to find.

If you are looking for cards to close out the game, Overwhelming Stampede is a classic for a reason. I tend to prefer it over Overrun, though thereâs no reason you canât run both. Itâs also pretty affordable and was reprinted in C19.

One last suggestion is Ohran Frostfang from Modern Horizons, which gives all your attacking creatures deathtouch and draws you a card when they damage a player. It basically makes your opponents choose between losing a creature or giving you a card every time you swing in. I think itâs better than Archetype of Finality from THB, which doesnât give you the card draw, but might also be worth a look.

First I want too say cool deck arch type idea. I am wondering if you did consider building in some mana ramp though. I get it, I too sometimes get over excited about the deck mechanice and forget about it. Good you considered the card draw other then just your commander.

Green offers some awesome land ramp like Harrow,Grow from the Ashes, and Rampant Growth. Also Springbloom Druid and/or Fertilid in the creature department. This is not only important for land matter decks but helps any deck run more smooth.

Further more the first two cards that come to mind for this deck are: Archetype of Finality + Ohran Frostfang. Allowing maybe a bit more creature flexibility with the deathtouch keyword.

LittleBlueHero Archetype of Finality is a fine card to try. I personally donât think it does enough for the amount it costs to get out. Paying 6 mana for a high value target that will likely eat a much cheaper to cast removal spell just feels bad and itâs a huge momentum loss should it happen. We have various other effects which will accomplish the same while also being far easier to cast and or employ.

That being said Iâll never fault anyone for running it. I just personally am stingy with my mana lol

Was Archetype of Finality mentioned? I know its on the higher side of CMC but giving your team Deathtouch is pretty good in my experience.