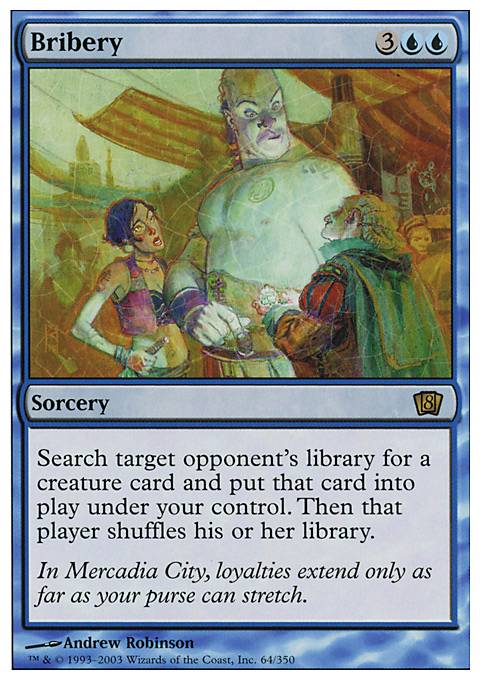 Search target opponent's library for a creature card and put that card onto the battlefield under your control. Then that player shuffles his or her library.

Bribery occurrence in decks from the last year

Honestly it feels like a rip off, but Im interested in seeing if they do some high value reprints, like the Praetors. Honestly one thing they could definitely reprint is Bribery and lower the cost on that.

Hexproof is based on the controller. For example if I use Bribery and go through an opponents deck and grab an Archetype of Endurance it makes my creatures hexproof, not theirs, and they cant target things I control.

While Gilded Drake's effect doesn't end when the Drake leaves the battlefield, that effect is notably different from that of Bribery.

On the otherhand, Bribery puts a card from an opponent's library onto the battlefield under your control. At no point is control of that creature changed. This is similar to how Thief of Sanity would work in this case. Since there are no control effects to dispell, the creature that you gained is exiled.

Super helpful, I think I know where I got confused. But, I do have 1 follow up. Rhadamanthus Tylord2894 If I Leave the game wouldn't the creature I took with Gilded Drake go to exile with the creature taken with Bribery? The drakes effect doesn't stop when it leaves play, like Control Magic does.

Technically Gilded Drake and Control Magic do work differently but the end result of a player leaving the game isn't going to be much different between the two.

Hello how's it going, I love commander and always like seeing what people come up with, since this is your first deck let me throw out a couple observations from having built many different decks over the years. First thing I notice is 31 lands is pretty low for not rocking some outrageous ramp/mana shoot closer to 36-38 if you dont have a ton of ramp but even my ramp decks dont go under 34. Next is the large amount of instants, since commander is designed to take longer and involve more ppl a classic instant packed deck doesn't have the same value as in modern, the 1 for 1 logic doesn't apply since you got 4 other guys to worry about ideally. Instants work best in commander as support for an over arching strategy of a deck, to many and you leave yourself cardless quickly unless your goal is to drop a Rise from the Tides while running telrand other than that you should make them more online with your theme, the stronger you can support your main them the better value for values sake will dilute a commander deck. that said some cards I think would run well with your deck are Bribery/Acquire would be funny, Azor's Elocutors/Mechanized Production/Approach of the Second Sun are all great alternate win cons for control decks. Dance of the Manse is a great card for this many enchants and artifacts and a Rise from the Tides or Luminarch Ascension would allow you to drop some creatures in favor of some more classic controll like Winter Orb,Stasis, Static Orb, Propaganda, and with this many enchantments Sphere of Safety. And lastly who wouldnt want to order the top of their deck as they see fit? Well Soothsaying is here to do just that. I hope this helps in any way if you have any question about anything I said feel free to ask, good luck and welcome to commander.(sorry 'bout being so long winded lol)