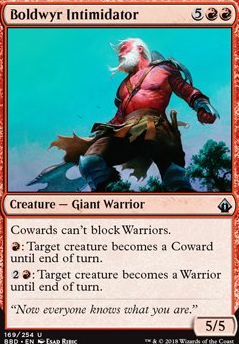 : Target creature becomes a Coward until end of turn.

: Target creature becomes a Warrior until end of turn.

Boldwyr Intimidator occurrence in decks from the last year

pain and gain
by taylorton147

Very nice I am especially a fan of the lumbering Satyr. You forgot pretty much the best shadow creature though: Soltari Visionary , also consider Boldwyr Intimidator , Crescendo of War , Nature's Revolt , Hunter's Insight -- which cannot be countered if you cast it during your combat phase Wishmonger .

In Yasova's Russia, Deck plays You

I would suggest a couple of odd alternitives for equipment - while it doesn't quite give the same boost (+3/+2 instead of +3/+3), Grafted Wargear equips for , and can be used to get rid of creatures much like the demonmail.

a steroider in creeature form would be Lovisa Coldeyes and just for flavor & comedy, I finally recommend Boldwyr Intimidator

I hope this helps, keep up the good work!

As an additional cost to cast ~, return an artifact card you own in exile to your graveyard.

You may cast ~ as if it had flash if it targets a creature that is attacking you.

Target creature has base base power and toughness 0/1, loses all abilities and cannot be tapped until end of turn.

New challenge: Create a card with the Creature subtype "Coward" to oppose the Boldwyr Intimidator, BUT, try to make it good enough to actually see some kind of play.

Other Weirds and Wizards you control get +1/+1 and have Haste.

I wasn't sure how to word the ability, so I turned it into an activated ability instead. Only kicks in when five spells are cast, which even in Commander will be difficult to pull off without serious build behind it. Would probably get banned rather quick, in my opinion.

Would be possible with tons of 1 and 2 CMC spells, but you also deplete your hand big time so I don't think it's really that easy to abuse, unless you ALSO incorporate a serious draw engine into it as well.

You know Boldwyr Intimidator? Well, make a creature with the Coward subtype.

DJ Najeela Running It Back

Warriors are fairly aggressive, I would recommend cutting down to 36 lands.

Boldwyr Intimidator can help you get through with warriors, Iroas, God of Victory can help too.

Lovisa Coldeyes buffs your warriors while giving them haste, and Khenra Charioteer gives them trample (Dakkon Blackblade can be a fun warrior too).

Purphoros, God of the Forge can take advantage of the tokens you are making. Ruric Thar, the Unbowed punishes your opponents for playing non creature spells (he can hit you, but it is totally worth it).

Nature's Will, Bear Umbra, and Sword of Feast and Famine can help get those extra combat triggers.

I've made a pretty decent Najeela warrior EDH, there are more cards in the deck that I didn't mention that you might find useful.

I would definitely recommend taking a look at my deck, it might give you some more ideas (and it would help me out too ;P).

Warriors, Come Out to Pla-ay!

Hope any of this makes sense. Happy gaming! And should you have the time and inclination, I would appreciate feedback on one of my EDH decks. Thanks.