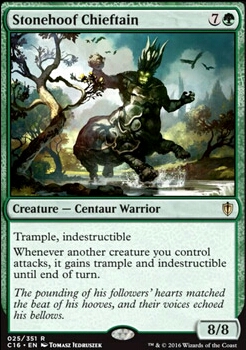 Whenever another creature you control attacks, it gains trample and indestructible until the end of turn.

Stonehoof Chieftain occurrence in decks from the last year 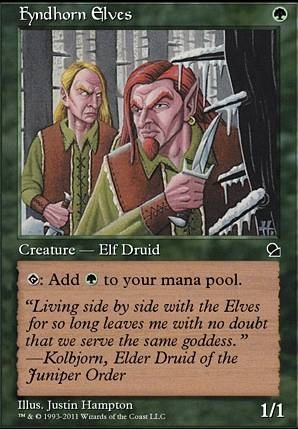 Saskia get crazy!
by Damus

The Gruul Clans
by Five-Sided-Prism

LordBlackblade on Cards That Protect Attackers?

Reconnaissance and Stonehoof Chieftain both come to mind.

My only concern is that you have too few bombs. When your Eggs (Changelings / tokens) die, you may end up revealing another small Changling, which isn't advancing your boardstate very much.

I'd suggest removing the Changelings for large creatures with huge threat levels. In my deck that I am building, I run Avenger of Zendikar as well as Chancellor of the Forge since they create vast swaths of tokens. I also have other large and immediate threats, too such as Avacyn, Angel of Hope and Aurelia, the Warleader . You want creatures who can stand on their own, without reliance on others. This means no Craterhoof Behemoth because if you get him out and you only have 3x other creatures, he is a dud. However, if you get out Stonehoof Chieftain , he is always going to be a strong asset, even if left alone. The same holds true for creatures such as Utvara Hellkite . Even if he is your only creature, he threatens everyone by self-fulfilling his own desire to span massive amounts of Dragons. Meanwhile, Scourge of Valkas is relatively weak because if he is the only Dragon you get out, he only deals 1 damage.

Look for giant threats who stand on their own, but also who don't have immense CMCs. You'd want to be able to play these creatures on curve if need be, or even a little ahead with ramp. This means no giant Eldrazi as they are just too large and if you draw into them, they are duds in your hand.

this is great, I'm so gonna make one of these, just with more clones and less of other stuff, so you are literally playing their deck with your cards, ecept for Stonehoof Chieftain which is a game ender once you have copied some huge creatures. by the way, this deck needs Alchemist's Refuge , you can replace a basic mountain for it, since the deck needs very little red. Alchemist's Refuge is a budget Vedalken Orrery which lets you cast Rite of Replication on the player's endstep right before your turn on your Biovisionary , winning you the game right there.

imSandstorm: It depends on the situation. If I have one fatty I know I could take someone out like Blightsteel Colossus in hand I'll use TnN to cheat it out. If I have nothing going on I will entwine it for the following combinations depending on the situation:

There's more combination that I've used but those above are the common ones. As far as Rhythm of the Wild goes, I'm not convinced that it is good in this deck because Xenagos already provides haste and is hard to remove. Also this deck doesn't really care if creatures get countered since I run a redundant amount of fatties.