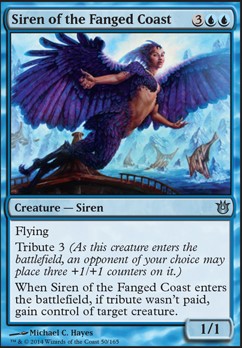 Siren of the Fanged Coast

Flying Tribute 3 When Siren of the Fanged Coast enters the battlefield, if tribute wasn't paid, gain control of target creature.

cheap but king urza
by kingroderic

Daxos of meletis
by kreltor

Bant What's yours is mine and mine again
by TheBawzzett 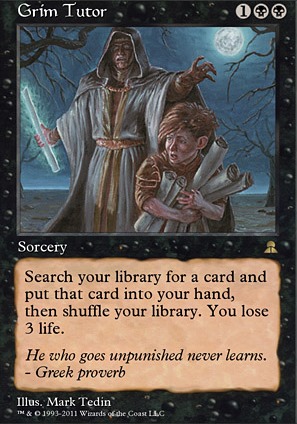 Siren of the Fanged Coast Discussion

xEleven That's awesome! I very nearly cut Siren of the Fanged Coast from the list but, after hearing that, it definitely stays! Have you been playing it multiplayer or 1v1?

Yo check out what just happened. I stolen identitied my own Siren of the Fanged Coast and I got about 5 4/4 with flying on turn 7 ish and he thought he was gonna win >:D

I would say that it's definitely worth it to run Cyclonic Rift since it's in your colors. It's a powerful card in EDH and if you're using it, chances are you have bigger problems than taking 6 dmg from Ruric Thar, the Unbowed.

Stingscourger is a good way to get color-shifted effects to make your deck less blue-heavy if you need. (I would just not pay it's echo)

Cytoplast Manipulator is just evil against that deck..

in fact, you may consider just running some creature steal or copy so you profit off of your opponents' creatures!

things like Faerie Artisans, Gilded Drake, Siren of the Fanged Coast, Sower of Temptation, Beguiler of Wills, Callous Oppressor, Charisma, Empress Galina, Frenzied Fugue, Illusory Gains, Roil Elemental, Rootwater Matriarch, Seasinger, Tolarian Entrancer, and Willbreaker are some great removal! Why kill artaxa or any creature really if you can just take it and make them use their removal on it if they want it back??