Whenever Tana, the Bloodsower deals combat damage to a player, create that many 1/1 green Saproling creature tokens. 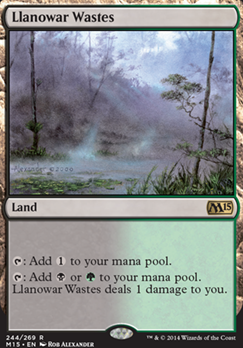 the token lesson
by Squril

I'd look at partnering Ardenn, Intrepid Archeologist with Tana, the Bloodsower. Tana comes with trample, so damage rolls over and Ardenn makes equip costs free. You get the RW for equipment/aura support and green for ramp. Plus when tana hits, she generates tokens, which means you can jeep your own creature count a bit lower, leaving you more room for auras/equipment.

1empyrean on Looking For Inspiration

Unlife - A naya Wheel of Sun and Moon tokens deck should really use Sunforger instead of trying to get value out of Krark. Personally, I'd use a different pair, like Ardenn, Intrepid Archaeologist / Tana, the Bloodsower.

But, hey, whatever works.

enpc on Could I get help with â¦

Tana, the Bloodsower and Ravos, Soultender would be your best bet. yes, this adds black to the deck (which you could just run to cast Ravos) however unlike Rienne, Angel of Rebirth, Ravos doesn't need to see stuff die to get it back from graveyard.

Additionally, Tana not only gets buffed by melee but also makes a bunch of saprolings which in turn get buffed by Adriana, Captain of the Guard. This by itself provides a pretty good win condition, meaning that you free up a few slots for more ramp, since this deck is going to be very mana intensive.

Hey hey sorry it took so long to get back to you. I paired her with Tana, the Bloodsower and that was interesting.

I picked up the quandrix and prixmari precons and gotta say they seem to break down Riku into his two halves pretty well. One is basically spellslinger and the other creature copies and they both have a lot of support. Played both separately and really like the way they play, wondering if you had gotten your hands on them yet and if you were incorporating them into Riku.