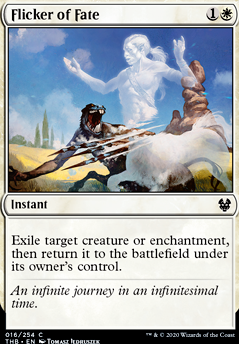 Exile target creature or enchantment, then return it to the battlefield under its owner's control.

Let me know if you have any ideas but it's working better than ever now, despite no one drop

Ah another fan of Happily Ever After !

Flicker effects also really work with your commander, things like Cloudshift , Soulherder , Thassa, Deep-Dwelling . Flicker of Fate in particular, as you can activate Happily Ever After again if it's on the field

I see you run a lot of cards that are multiple types! Another good one would be Baleful Strix . And really any of the multicolored gods from Theros would work, as they're hard to interact with once they hit the board. Since your primary goal is Happily Ever After with a fall back of control Zur the Enchanter could fit your bill. You have a few other targets in your current build for it as well, with a weird fun one being Klothys, God of Destiny .

Seems like an interesting list. Did you consider running The Birth of Meletis ? It seems like you could use some extra early protection that helps you get to your big spells.

If I was you I would try adding a single copy of Flicker of Fate so you can occasionally save a creature from removal and reset Niko Defies Destiny , but mostly because getting another ETB from Burning-Rune Demon would be nuts and it would also let you turn Hakka, Whispering Raven into Alrund, God of the Cosmos Â Flip at instant speed on turn 3 while you still have a full hand. Also has some implications to bring back stolen cards to your side, for what it's worth.

It's all a bunch of specific scenarios, but I'm sure if you have only 1 in the deck you'll always find a sweet use for it.