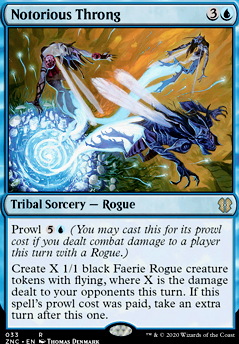 Prowl (You may cast this for its prowl cost if you dealt combat damage to a player this turn with a Rogue.)

Create X 1/1 black Faerie Rogue creature tokens with flying, where X is the damage dealt to your opponents this turn. If Notorious Throng's prowl cost was paid, take an extra turn after this one. 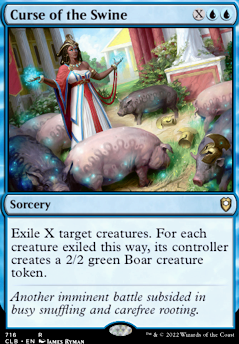 Love the deck, and I appreciate that it leans toward aggro rather than mill. I have a similar Anowan deck, but mine focuses on stealing creatures from graveyards.

Just to name a few.

I tested this out a few times, goldfishing wins ranging from turn six to turn nine. Zareth San was a factor in only the first game, while the deck's internal synergies made him seem totally unnecessary in the other two. As described above, card draw felt all-or-nothing, and the milling did too. Particularly early in the game, it seems like milling is not really a part of the deck, but then all of a sudden in one game I milled 90+ cards. The deck really is surprisingly aggressive, with the turn six win coming on a stunning Notorious Throng producing 14 faerie tokens that were basically 3/2s due to Stinkdrinker Bandit .