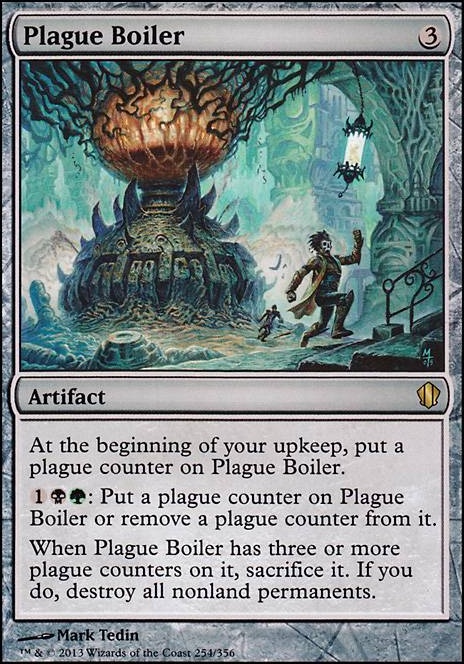 At the beginning of your upkeep, put a plague counter on Plague Boiler.

When Plague Boiler has three or more plague counters on it, sacrifice it. If you do, destroy all nonland permanents.

Plague Boiler occurrence in decks from the last year

Wait, you forgot about the damage
by HHJames

Hey here are some suggestions on what to add and remove (there's 14 cards in all suggested to include, and 14 below to remove).

Hi! I'm personally a huge fan of Muldrotha as a commander; so first of all, nice choice! Here are some cuts and additions I'd recommend:

Hope this helps! Feel free to leave a comment on my profile if you'd like further suggestions for this or any other deck! Good luck!

Hi ZendikariWol, those were a lot of interesting suggestions! Il do my best to give feedback on all of them (this post might get long so sorry in advance xD)

Baloth Null, Greenwarden of Murasa and Noxious Gearhulk are difficult inclusions given the amount of great 6 CMC cards there are. Off the top of my head I can think of Grave Titan and Kokusho, the Evening Star and those didnt make the cut.

Too many players from my playgroup run Homeward Path for me to be able to include Sepulchral Primordial but I would say normally it is a great inclusion.

Killing Wave seems like it would most of the time be an overly expensive board clear. Wouldnt Torment of Hailfire be better? If possible I would like you to elaborate a little more on your reasoning for this one.

Jarad, Golgari Lich Lord has been getting a lot of attention recently but I think I prefer Hell's Caretaker. More testing is needed for this one though.

Shadows of the Past and Golgari Germination dont seem to do enough to take up a slot unless you have a strong token theme.

Plague Boiler is interesting and does contribute to the political game but Pernicious Deed is just too good and I dont think I can make room for both...

Thoughtpicker Witch is a really cool card but having to pay mana to sacrifice makes it worse than Viscera Seer and Carrion Feeder unfortunatelly.

Catacomb Sifter is likelly a future inclusion and its just a metter of figguring out what is going t be replaced.

Savra, Queen of the Golgari - how often is she triggering in your games? Ive been thinking of adding her but Im not sure she would do enough

Quagmire Druid and Stronghold Assassin are too slow. Generally speaking you want removal to work the turn you cast it and theese two might put you in some awkward situations more often than not.

Lifecrafter's Bestiary is a clear oversight on my part. Ill be adding it soon

Sifter of Skulls costs too much but I might include Pawn of Ulamog instead. Might even end up running both.

Vampiric Rites is a fine inclusion and I wouldnt blame anyone for running it. Like I mentioned above, the sacrifice cost not being zero makes other cards better in my opinion.

Butcher of Malakir seems worse than Sheoldred, Whispering One which Im currently testing

I agree that Joraga Treespeaker, Birds of Paradise, Big Game Hunter and Deathrite Shaman might not be good enough. Ill be paying moe attention in future playtesting to see if I shoul replace them.

Like most of your comments, this is about to be a long one.

I run a meren deck myself, equally beatiful as a mix of casual and competitive. Check it out here: Okay, the Whole Death Thing? Minor Setback..

So, here is a list of cards to consider:

Sac Targets: Baloth Null, Eternal Witness, Greenwarden of Murasa and Sepulchral Primordial are all good semi-reanimators. Sacrificing one creature per turn is awful. These guys will keep the late game engine flowing. Yes, their mana cost is a touch hefty but you may not even use the Primordial and the other three are honestly fine if you throw in some ramp. Speaking of, Primal Druid and Viridian Emissary are good, but Veteran Explorer is truly spectacular. Lots of ramp, and you may just get the table on your side. Noxious Gearhulk and Vindictive Lich are both so scary. People don't want to attack into Vindictive Lich and they don't want it dying, so they all leave you basically alone. That's been my experience, anyway.

Now for the outlets. You NEED you a Killing Wave. It may not be recurrable (recursible?), but dear GOD it messes up everyone's day! Jarad, Golgari Lich Lord can be really good, especially with the aforementioned Vindictive Lich. Perilous Forays is just some of the best ramp ever. Plague Boiler is a fun political piece, if you can hold it up. Quagmire Druid is very useful. Stronghold Assassin is great removal, but maybe to spiky for you. Thoughtpicker Witch can PICK apart combo, pun intended. It sounds far fetched, but honestly Vampiric Rites can do a lot of work!

Passive effects that you may wanna get your hands on include Catacomb Sifter, Reaper of the Wilds, and Shadows of the Past, Golgari Germination and Sifter of Skulls, better yet Gutter Grime, Lifecrafter's Bestiary is piles and piles of card advantage. Zulaport Cutthroat is not as bad as it may seem, doing some nice noncombat damage. However you may want to spread out your sacrifices with these effects on board, big turns always attract attention. Also possibly too mean/spiky for you are Butcher of Malakir, Savra, Queen of the Golgari, and Dictate of Erebos. I would make a case for Savra, Queen of the Golgari, however, as the sacrifice effect is optional and it could gain you some nice life.

I have a definite contempt for stax in commander. Leave the spiky trash for legacy.

So for outlets, the all-stars are, maybe Corpse Traders if you have a combo-y meta, Disciple of Bolas, Perilous Forays, Quagmire Druid is a MUST, Stronghold Assassin, and surprisingly Vampiric Rites.

A couple wraths: Killing Wave, Necromantic Selection, and Plague Boiler (a great bluff if your opponents can't remove it).

Targets include Dawntreader Elk, Entomber Exarch, Mesmeric Fiend can be sac'd in response to the etb which resolves in this order: first you sac it, then it leaves the battlefield, then it enters. Essentially exile a card in an opponent's hand. Primal Druid, Reclamation Sage, Thragtusk, and Veteran Explorer.

"weaknesses - card advantage, oblivion stone-like effects"
I haven't played Savra in a while, however Oblivion Stone and stuff like it were excellent for my deck.

Since you're not terribly artifact/enchantment heavy and you use land ramp, you should be able to sack creatures for whatever value you can get and then blowup the board as necessary. Personally the only times I was ever winning was when the board was fairly clean and my only edge was the attrition game with a piece of recursion. My less than ideal board state was usually better than their nonexistent one.

That said Oblivion Stone and Gaze of Granite were always good to have on hand, and Plague Boiler looks like could be fun.
Tranquility was another favorite of mine, however I see there's Back to Nature and even Primeval Light which both look much better.