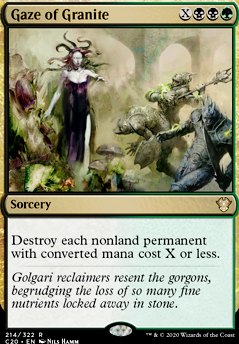 Snakes on a plane real
by eEsnowalkerEe

Nice Tokens You Got There...
by sevro_b

Zaxara got a phat X

There are many more blue counterspells with X in the cost. Power Sink is my favorite.

I'd ditch Gaze of Granite because it murders hydras automatically.

Cloudstone Curio allows you to return creatures to your hand and then recast then. You have a steady source of hydras then.

X(Spells) Gon Give It To Ya

I took the time to analyze your suggestions and here are the changes I plan to test:

so let me resume:

out: Greenwarden of Murasa, Smothering Abomination, Wood Elves, Gaze of Granite and From Beyond and Homeward Path.

Thank you all for your comments.

One thing you may want to consider is slotting at least one more board wipe, relying on just one like Gaze of Granite can lead to some dangerous situations.