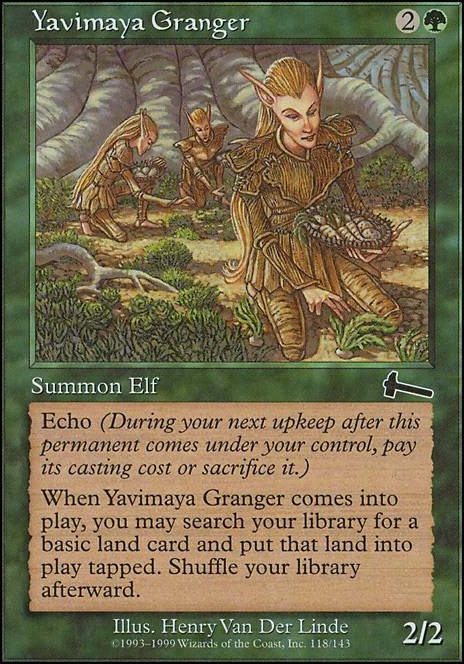 When Yavimaya Granger enters the battlefield, you may search your library for a basic land card and put that card into play tapped. If you do, shuffle your library.

Yavimaya Granger occurrence in decks from the last year

Creatures like Farhaven Elf and Sakura-Tribe Elder are great, and I don't mean for them to come out. Others like them that would run well include Burnished Hart , Yavimaya Elder , and Yavimaya Granger . Anything that can sac itself with Meren on the board is a bonus. With the Granger, you just decline to pay the echo cost if it suits you.

I run an Aristocrats package in my Meren build, but you don't have to if you don't want to. But the sheer fact that creatures are going to die a lot over the course of the game does make cards like Zulaport Cutthroat , Blood Artist , and Poison-Tip Archer great for wearing opponents down.

I like Whisper, Blood Liturgist , and think she is pretty strong. I do believe you can sacrifice her to herself to satisfy the trigger, too. I think you are running enough tutors to get to your win conditions on a fairly consistent basis, but I find that playing a deck that is too consistent can tend to get you removed from the table fairly quickly. When I first build my Meren deck, I crammed it full of tutors. As I've gone forward, I've taken more of the tutors out, which takes away some of the consistency, but let's me put more fun things in to play, and provides a fresher game play experience for me. But that's just my experience. Your mileage may vary.

What I'd take out:

By the way, Guardian Project is a great card. First time that I see it.

I like how you made this deck. 35 lands are enough if you run more ramp however. You are fine with 35 if you run 10-15 ramp pieces. Try to include: Yavimaya Granger , Wood Elves , Farhaven Elf instead of mana dorks. Work great with your commander.

Added a Dredge and Mill Sub-theme to the deck after considering the . Im going to try this out and see how i like the changes

I also would go only 36 lands and add more ways to grab or put lands onto the battlefield. Walking Atlas , Terrain Generator , Wood Elves , Yavimaya Granger , Dawntreader Elk , Sakura-Tribe Elder , Fertilid (pairs nicely with Retreat to Kazandu ), Ondu Giant , Ranging Raptors , or Veteran Explorer are my go-tos depending on what I need.

Also Yeva, Nature's Herald would be great for flashing in Nikya to tap your (now) 2x producing lands and drop a threat/blocker.

I know a few of my suggestions are non-creature but Nikya will not always be on the battlefield. Hope something helps!

I also mulled brewing around with surveil and overgrowth with Sidisi. My conclusion was you want more surveil than overgrowth because of the wording of Sidisi's token making ability. Overgrowth should be more payoffs.

At a glance, and imo, you have way too many creatures (and not really the best ones either, don't just add em because they have 1 of the 2 keywords), too many lands, no ramp, and little interaction to slow/mess with opponents.

In my decks I aim for 36 lands, 10 ramp, 10 card advantage, 10 interaction, 3 wraths, which leaves 30 slots for my theme (I emphasize cards that pull double-duty, like Price of Fame would be both CA and interaction).

For lands: I would cut the guild gates for Evolving Wilds, etc. so you can definitely have the mana you need because both will come in tapped anyway. 3-color decks can be tricky to get the right mana when you need it.

For ramp: since overgrowth is a consideration Sakura-Tribe Elder, Dawntreader Elk and Yavimaya Granger all get lands out and go to the graveyard. Sorceries like Farseek, etc. let you get ahead too and I would suggest choosing ones that are CMC<2 because the goal (I assume) is to have Sidisi out on T3.

For CA: surveil is great so probably don't need many others outside it but I'd look for other cards like Taigam's Scheming, Windfall and Monastery Siege that let you draw and discard.

For interaction: I always try to have a few answers for different types of threats. So Naturalize for enchantments and artifacts, Arcane Denial to counter but also draw a card, Tormod's Crypt to hose a graveyard, Doom Blade to kill creatures, etc. It all depends on what your friends are playing and what you need to answer, so the final ratios will reflect that.

I'd be happy to look at this again to see how it progresses!

Hey here are some suggestions on what to add and remove (there's 14 cards in all suggested to include, and 14 below to remove).

Hi,
I'm happy to see, that you like the best commander of all time, Meren ;-). Really like the addition of Apprentice Necromancer - gotta include him in my deck as well.

But there are some cards, that have no synergy with your commander and could easily be replaced. Creature ramp like Birds of Paradise, Elvish Mystic or Elves of Deep Shadow don't really do anything for your experience counters.

But with creatures like Yavimaya Granger, Burnished Hart, Dawntreader Elk or Yavimaya Elder you get ramp AND experience counters - this way you can loop your ramp creatures every round with Meren.

Your curve has a little breakdown at 6 - Mikaeus is your only 6-drop :(. Here are some creatures that work as a 6-drop in Meren: Kokusho, the Evening Star, Grave Titan, Bane of Progress, Massacre Wurm, Wurmcoil Engine.