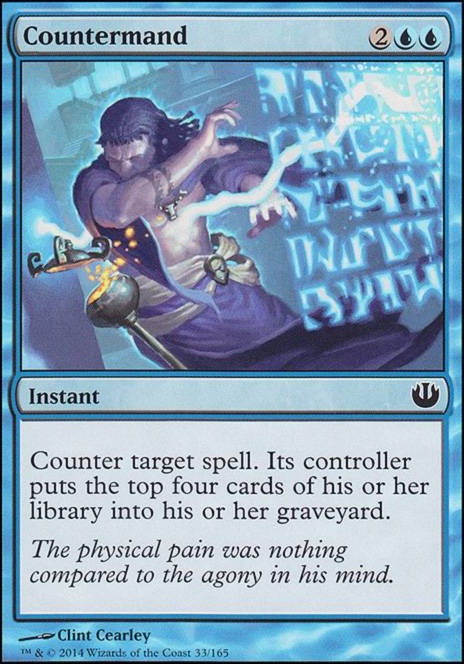 Counter target spell. Its controller puts the top four cards of his or her library into his or her graveyard.

Creatures you control enter the battlefield with haste and +1/-1 until end of turn.

+1 Exile the top two cards of your library. You may put one of those cards into your hand. If you do, pay life equal to its converted mana cost.

-7 Exile the top three cards of your graveyard, then return all cards you own in exile to your hand. Until the end of your next turn, you have no maximum hand size.

Yeah he's mad. At everyone. I want to play this with Risk Factor and other jump-start cards that get themselves exiled while doing damage. (I still think Risk Factor is underestimated) He is also friendly with Rakdos-flavored Delve.

I'm a fan of counterspells that have additional effects, such as the dimir Psychic Strike and the simic Plasm Capture and the azorius Absorb . We even have some mill counterspells ( Thought Collapse and Countermand ). They're not as efficient as a good ol' Counterspell , which may never get reprinted into standard (thank the stars), but they do let us fit counterspells into decks that we want to do other things with (like I put Absorb into my standard deck with Resplendent Angel in order to help protect it and trigger its ability on my opponent's end step). So the next challenge is to create for me a counterspell that has an additional ability, made for a specific deck archetype, the way mill is made for mill and Plasm Capture is made for ramping up to big sick simic things.

I think Countermand and Think Twice are about the only suggestions I can think of.

Mana Leak, Last Word, Wizard's Retort, Overwhelming Denial, Devious Cover-Up, Desertion, Countervailing Winds, Bone to Ash, and Countermand are all some counterspells you don't have in here if you want more counters.

Even with your mill theme, Counterspell seems much better than Countermand. I'd also recommend playing removal of some sort, like Chainer's Edict, Disfigure, etc.

Jace, weakness of the mind

I really wonder how is this deck supposed to be competitive, as it just seems like a random bunch of cards thrown together.