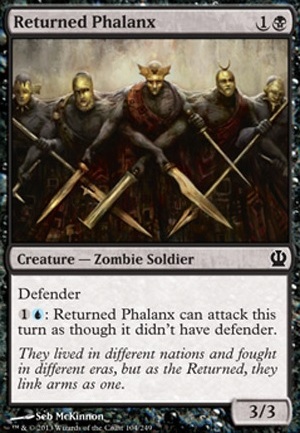 1B: Returned Phalanx can attack this turn as if it did not have defender 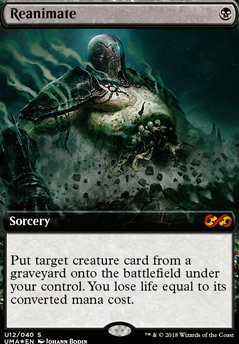 Great deck! Cheap for kitchen table magic and a perfect template for a blue/black budget zombie deck. I really like Undead Alchemist but it's weird to switch to a milling strategy if you pull him late game. I'll probably still run him for the fun of it, but do you have any other suggestions to replace him?

Also, I have a few copies of Screeching Skaab that I might replace Returned Phalanx with to make the most out of Ghoulraiser and Ghoulcaller's Chant's graveyard flexibility and to beef up Unbreathing Horde.

As SoakingDrop52 said so are Geralf's Messenger a really good threat thx to undying.

Here what i would do:

Add following card or consider them: Phyrexian Arena, Dark Confidant,Sign in Blood For card draw, you will empty your hand really fast.

Add 3x more Gravecrawler, more lords like Lord of the Accursed and Diregraf Captain. 4x Relentless Dead could be awesome.

You need some disruption in mainboard, go get some: Thoughtseize,Fatal Push,Collective Brutality, Dismember or Liliana of the Veil.

There are plenty of options but these are some of them.

Cards to take out:

Indentured Djinn while the logic is solid behind choosing him, he's each opponent "May" draw, allows them to opt out of the 3+ damage

Duskmantle Seer fit's the flavor, but isn't actually a draw which could easily net you less damage across the board.

Trade Secrets is illegal in the commander/edh format

Swamp/Island/Mountain you have way too many lands in this deck you could probably run 10 less land and still be A-okay, obviously you should playtest it and tweak it accordingly.

Arjun, the Shifting Flame my friend runs this guy in a red/blue locust god EDH it forces all sorts of draw on everyone.

Jin-Gitaxias, Core Augur Later game nets you heavy amounts of draw and makes your opponents lose any card advantage you might give them.

Sturmgeist you're going to have a fair deal of cards yourself

The Locust God tokens for days.

Viseling hand sizes will easily be 4+ damage will be dealt.

Archmage Ascension why draw cards like a plebeian when you could tutor all the cards?

Price of Knowledge Damage for days

Well of Ideas All the draw.

I suggest you cut: