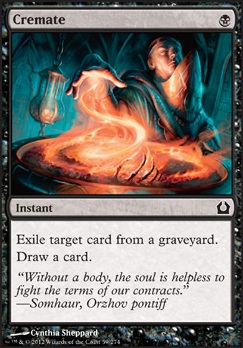 Exile target card from a graveyard.

Aaah MAN I can NOT beLIEVE I forgot about Hymn to Tourach, I'm so disappointed in myself.

The comment about the interaction is totally true, I really wanted to try out the strategy of suicide black and didn't really think about interaction too much. I'll probably take your advice and add in some Dismember and some Inquisition of Kozilek, those are both pretty good and well within budget range for me.

Cling to Dust is pretty good, I'll try it out in place of Cremate, the reason I have those (and Aphotic Wisps) is because I just really love cantrip effects; mostly irrational, but I like them nonetheless.

Rouse is really fun as a combat trick with a Death's Shadow, but you might be right about it not having high enough impact on the game; maybe I'll try out Cruel Bargain instead. But, only a couple, I want to keep the CMC down, the other slots will likely be for interaction.

I really enjoy playing Village Rites just as a card, especially post combat with it being the only card in my hand, but yes, it is a really really bad topdeck. I might cut some number for other card draw, but if I ever do end up with Unearth in the main I will likely bump the number up again.

Speaking of Unearth, yes, the sideboard is more of a maybeboard; it's filled mostly with cards I enjoy playing in this strategy, or just don't have room for.

For more removal, I'll mix it up with an assortment of some of the cards you suggested.

Thanks so much for the suggestions Draly, I have virtually no experience with the legacy format so it's nice to have someone with insight to offer.

I think you should run more graveyard-hate. I only see Planar Void, but you need more ways to wipe your opponentâs graveyard. If your graveyard gets wiped too, thatâs fine. Some deck types love it when you discard their cards for them, like The Gitrog Monster and Reanimator decks, and those decks are your main weakness. Iâve learned this from other T/O users who saw the same problem with my deck. You need to be able to draw more options without having to tutor for them all the time. Cards like Leyline of the Void, Tormod's Crypt, Cremate, Cling to Dust, Nihil Spellbomb, Soul-Guide Lantern, Relic of Progenitus, etc.

Another card I really like is Praetor's Grasp because it allows you to take out the card you think your opponent needs the most for their strategy. It has served me well several times.

Also I think Peer into the Abyss is expensive mana-wise. I would swap it out for Ad Nauseam, which is more effective and cheaper (mana-wise and now price-wise after it was reprinted).

Also, add some cantrips! Cling to Dust is great. Not very familiar with black cantrips though, maybe Cremate? Not great but it works.

Personally when tuned this probably wants a few more pieces to properly abuse the graveyard, specifically your opponents' graveyards, as they, when stocked as this list does so well, can be value your opponents gain in the cases of Kess, Gitrog, and many other decks. Cling to Dust acts as a cantrip that exiles a card, as does Cremate, and while both can be run, cling is repeatable from your graveyard, however is perfectly fine for gaining life for a Necro or for Tinybones triggers when need be.

Cling is my best suggestion for this build.

Separately, I would suggest Mikokoro, Center of the Sea and Dark Confidant (however for confidant, I'd make sure to drop Awaken the Erstwhile, Beseech the Queen, and a few other high rolling cards).

Mikokoro serves triple in the deck. It draws you action in a pinch, and can be played politically in a pinch too, however secondly can fill opponent's hands when they are empty just for the discard triggers. Thirdly, it can stop all Thassa's Oracle combos, as when the trigger is on the stack if they draw a card and have no cards in deck, they die.

Yes, it's worse than Geier Reach Sanitarium, however is a second copy for consistency!