Counter target spell. At the beginning of your next precombat main phase, add X mana in any combination of colors to your mana pool, where X is that spell's converted mana cost.

kruphix, god of horizons
by twinightbubble7

Winter is coming
by KBgamer2010 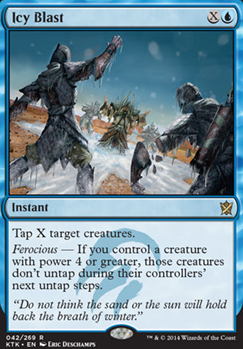 Ochre Jelly seems like a must in this deck. You seem light on both ramp and card draw. Bounty of the Luxa can help you with both of those. Iâd also toss in a few mana rocks, at least the basics like Sol Ring Arcane Signet ans Simic Signet. Plasm Capture can also foil your foesâ plans but help you cast a chunky ooze. Speaking of basics, Command Tower is a cheap untapped duel land.

I have replaced Plasm Capture with Insidious Will , which was a replacement that I was sad to make, but the latter card suits the theme of this deck far better than did the former.

Ziabo I'm still in my draft phase lol, but with the mana ramps I hope it won't be an issue. I got a total of 17 mana ramps. My thoughts are if I can get a good counter off Mana Drain , Plasm Capture , and Spell Swindle to hit a boost for my mana ramp or big spells that have big board impact. Some cool synergy I'm going for is Awakening Zone with Sakura-Tribe Elder or Wood Elves with Esix on the board.