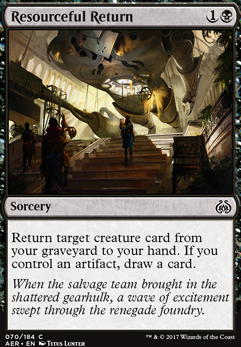 Return target creature card from you graveyard to your hand. If you control an artifact, draw a card.

Resourceful Return occurrence in decks from the last year

Scourge of Bois
by Schlaglas

Pirates and Robots Can Be Friends
by Futuremonk

Empty the Crypts
by SonusNox 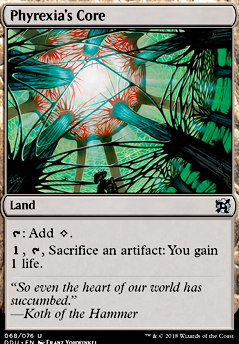 Really not a fan of Resourceful Return when you have this few artifacts.

I also think you should cut a bit down an the sheer volume of your lategame combo. With this many pieces it could easily end up clogging up your game-plan early on, leading to a loss before you get properly set up.

Meybe get those Gifted Aetherborn to a 4-of, and get a few Kalastria Highborn , maybe even get a Kalitas, Traitor of Ghet .

Also, Inquisition of Kozilek and/or Thoughtseize are key to beating combo decks.

taylorfisdboss: Unearth is another good suggestion. I still need to pick some up however. Resourceful Return has been a surprisingly good placeholder though. Thanks for commenting on my decks!

Sorry, Did you want those creatures?

I've never played a Sheoldred deck, but I do have a Horobi, Death's Wail deck (Horobi Jankness) and might be able to suggest some general mono-black good cards.

Jaruun Yes I ran 3 Authority of the Consuls A few of the issues that came up. Was when their creatures either had double strike or they just exiled my enchantments/artifacts as I put them out. I often found myself needing to block with my creatures just to survive till turn 6, while hoping for a Dusk. The creatures I found to be most useful were Kalastria Healer and Cliffhaven Vampire. I think a better drain option is to switch out Ondu War Cleric and Zulaport Cutthroat for something like Chaplain's Blessing, Dazzling Reflection, Expedition Envoy or Battle at the Bridge. I will trade out Live Fast for Resourceful Return or Renewed Faith.

What I might try and go for is getting 1-2 Cliffhaven Vampire out then using instant spells to trigger drain. I know Live Fast was a way to get energy for Aether Hub but I added a couple Evolving Wilds to get plains if I need them. I also added two Sunscorched Desert.

Here are some sideboard ideas from Kaladesh and Aether Revolt in no particular order.