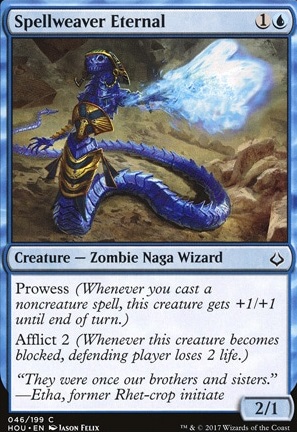 Spellweaver Eternal occurrence in decks from the last year

The Dreadhorde
by Sager5

From the Shadows
by Courtmccac999

You should cut Spellweaver Eternal for Kiln Fiend

In all honesty, this looks like a deck for Standard. A lot of the wizards are the best Standard has, but not the best Modern has. I would drop Spellweaver Eternal for Wee Dragonauts and maybe 2 copies of Siren Stormtamer for Sage of Epityr. Just some suggestions.

I would say maybe to take out Spellweaver Eternal. That seems like a bit more of a wizard for Standard, and is a little bit underpowered in Modern. Another suggestion that totally slipped my mind earlier is Stormchaser Mage. Haste, flying and prowess on a decent body make that card one of the best budget wizards.

Hereâs the changes I would make:

Then again, Iâm a casual player and not that experienced with decks like this, so thatâs just what I would do.

Almost the same as my deck, but I left out Soul-Scar Mage and Spellweaver Eternal as rotation is about to hit. Using direct damage from red spells and wizards to synergize with The Flame of Keld ( I use 3 instead of 2 ) also Mystic Archaeologist is probably my favorite card in standard right now, I would always use at least 2.

My playstyle is hit hard early, empty my hand, play The Flame of Keld, survive 2 turns and use 4+ cards to deal direct damage with +2 bonus damage.

Tempest Caller is an awesome finisher, I use 1x

Viashino Pyromancer goes in for Spellweaver Eternal, but for Soul-Scar Mage i got nothing better to choose from. Hopefully the Ravnica set prints a good 1-drop for Izzet.

I'm running 2 Viashino Pyromancer in my Izzet Wizard deck for the time being. Once Spellweaver Eternal cycles I'll add 2 more, but then I really don't know what to do about the last two slots. Maybe Guilds of Ravnica will offer some great options

Hey, I saw your forum topic; you're right the deck is stuck between being aggro and midrange. I suggest going aggro being fast and cutting any cards above three mana. Pumping all your Wizards with burn thanks to Adeliz at the same time doing damage to your opponent with the burn is a good direction to take this deck. Less focus on Wizards, more focus on cheap mana cost instant/sorceries that trigger Adeliz.

I suggest 4x Adeliz she's your build around card and even though she's legendary you want to consistently draw her in all games to be able to do this you want 4 of her. She's also quite fragile, if she dies you want more opportunities to draw another Adeliz.

4x Shock, 4x Lightning Strike and 4x Wizard's Lightning is a good burn to opponent base that can also fuel Adeliz. 4x Opt because it can first help to find Adeliz and then trigger her to pump Wizards as well as find burn. In my opinion it's one of the best spells with Adeliz.

Chart a Course and Warlord's Fury are nice cards to trigger Adeliz while also draw card(s). Dive Down can be clutch to save Adeliz or another Wizard from removal and in combat, it's a fine sideboard card. Wizard's Retort can also be clutch it's good, so is Negate, but each are better as more sideboard cards for control matchups.

For the Wizard creature base consider: 4x Adeliz, 4x Lavarunner, 4x Spellweaver Eternal and 4x Soul-Scar Mage? Soul-Scar and Spellweaver have prowess this ability is very good for this strategy. They're like Adeliz except instants/sorceries only pump Soul-Scar or Spellweaver not all your Wizards like Adeliz does. Still prowess is the ability your wanting to play because it lets you pump these Wizards not once, but twice with Adeliz also in play. Without Adeliz these Wizards can still get a pump from instants/sorceries which makes a huge difference in the amount of damage you possibly do with these Wizards.

For example, it's turn four you control a Spellweaver, an Adeliz and four lands. You start with casting Shock Spellweaver will become a 4/3 and Adeliz will become a 3/3. Spellweaver gets the +1/+1 pump from it's prowess ability and another +1/+1 pump from Adeliz's ability. Next you cast Lightning then Spellweaver becomes a 6/5 and Adeliz becomes a 4/4. This is potential 15 damage to your opponent this includes 5 damage to opponent from the burn spells this turn. With any other instant/sorcery in your hand you can potentially win on this turn.

Adding all this advice up, consider this fast aggro version:


Good luck with your deck.