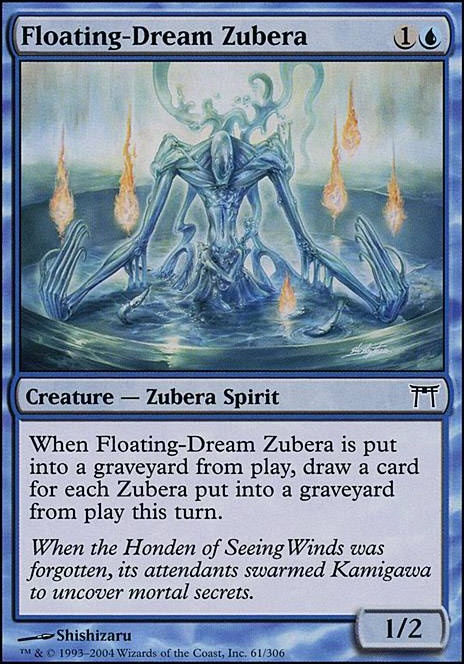 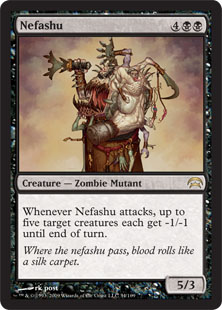 @Gattison: Technically, the common Changeling Shapeshifters count as Gods and Demigods, so if you really wanted to for some reason, you could actually get the lifegain bonus from Altar of the Pantheon as long as you have one of those guys out.

Araumi, Raiser of the Darkened Depths

Thanks Grind ! I absolutely will be adding Monastery Siege to my Maybe Board and Geier Reach Sanitarium straight into the deck.

I previously had Mulldrifter in the deck but cut it for cards like Floating-Dream Zubera & Impaler Shrike , although I believe I do need more card draw in the deck so I'll put that back into my Maybe Board.

Crow-Umbra: Broodbirth draws 9 if all the copies hit -- not BAD, but we can draw 9 for 2 mana with Undead Augur/Floating-Dream Zubera. I'm completely spoiled, I don't want to pay 5 mana for the cards XD

The Fell Specter is an interesting idea, I'll think about that! It's a shame that it doesn't say "each player discard"... Still, I've cut the big discard effects here because my playgroup was PISSED about them.

Nice to see someone else brewing Araumi, I think she's got a lot of potential! Here's my list if you want to compare notes, see if either of us missed anything:

My list isn't budget, per se, but it easily could be. All of the combos rely on very low-money cards, it's just the tutors and a few things I had sitting around (like Gilded Drake) that make up the bulk of the cost.

The biggest things I feel like are missing in your list are Unesh, Criosphinx Sovereign (let's do the Sphinx of Uthuun ETB-FoF 9 times!), Wake the Dead (a wildly under-appreciated card, which goes infinite with a LOT of things), Fatestitcher (get a free untap from GY), Floating-Dream Zubera (draw 9 for 1U)... I hope my list inspires you!

If I use Viscera Seer ability to sacrifice Floating-Dream Zubera, can I choose which trigger resolves first? If I scry or draw first?