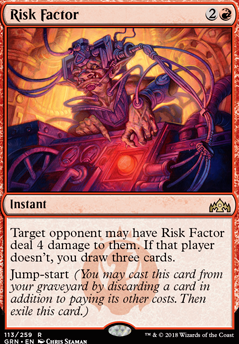 Target opponent may have Risk Factor deal 4 damage to them. If that player doesn't, you draw three cards.

You Smell Something Burning?
by saber4734 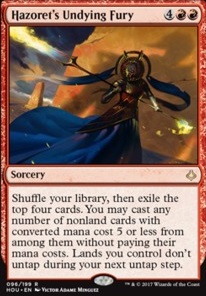 What are some useful aikido cards that i could use? Perhaps Hallow? Is Harsh Mentor a good card? I think that activating abilities is common? Braid of Fire is amazing for ramp. I'm really looking for straight up draw cards that are within boros manabase. Best thing i could find was Risk Factor; Useful as a damage card early on, and a draw card whenever the opponent is lower on health.

Although I am an EDH aficionado I too am a fan of the cheapest and fastest deck in Legacy.

Skewer the Critics definetly worth a spot.

I played two games last Friday. Both of them were extremely draw heavy, and one had constant lifegain. No matter how much I burned, I couldn't keep up with the lifegain. Then, whenever he was done putting a few creatures on the field, he did damage to me based on creatures and cards in his hand. I then realized how well Boros Reckoner and Gideon's Sacrifice would have been if only I could have them in my hand!!! Also, Monastery Mentor was useless. Made one token, then was removed. In light of this, I would rather have 4x Vexing Devil and Risk Factor. One drop for either a lethal creature or a 4 burn. Three drop for 3 cards or 4 burn. I never ran Soulfire Grand Master. When I put Eidolon of the Great Revel, the opponent ETB one card, 2 damage to him, then pulled a card that said prevent all noncombat damage. I could have sworn these guys were prepared for a burn deck, or at least were used to facing them. My aikido is something that will

The inherent randomness of the game is what makes the cards Vexing Devil and Risk Factor difficult to use if I'm searching for moments to take advantage of. What I really want though is something like Sorcerous Spyglass or Elite Spellbinder. I could have sworn I saw an instant or sorcery or enchantment that was Azorius or mono-white or something that allowed me to look at the hand. Anyways, if I can look at their hand, it will make my ability to use my aikido cards even better.

The simple MV of Risk Factor is a indicator that it should be used later in the game, and rightly so, as it will at least be used in turn 3, and that's when I either need more damage or more cards. More cards is very advantageous for me, at least in playtesting on this website, as I often run out of cards in my hand around turn 4-5. In most cases, when you're drawing a single card each turn, and you have an empty hand, you are making petitioning prayers for a good card in one draw. And each turn is only one draw in most cases; this is a lack of variety and ability to respond to the other player. The more openness in ability to make decisions, the more control we have over the choice.

Beginning the game with a 4 damage instant with Vexing Devil, which is probably going to be the default choice of players against it in the 1st-3rd turns, means that I am making optimal use of it regardless. They would have to have an advantage against me like removal if they chose to run its creature form; but even then, the card is only one mana, which makes it just as good as losing any one drop; just because it's a 4/3 doesn't change my investment in it. People are saying that Monastery Swiftspear is better, but it's just as susceptible to removal, and deals less damage. The only reason people would rather run Monastery Swiftspear is the psychological effect of ignoring something that isn't a strong stimulus. In this sense, they might allow monastery mentor to continue to be on the battlefield simply because it is a weak, blockable card, and they can afford to lose life. Investment is only investment when you're not gambling. However, if the choice is a dichotomy, and choosing the lesser of two evils is there, generally the best choice is the path of least resistance. But, in the inherent randomness of the individual's foresight and tactics, yes, it is somewhat of a disadvantage for me if I do not use it when there is a 'in-between' moment. For instance, if it's the 4th turn, a vanilla 4 mana card is generally going to be a 4/3 or 4/4 or 3/4. This means that when I cast Vexing Devil it will be an ambiguous choice, as the opponent is picking their best while in reality being in conditions that are optimal for both. the illusion of control is a lack of control.

Light Up the Stage still requires you to pay the mana costs for the exiled spells. They follow all the usual rules for casting/playing, the only difference is that you're casting/playing from exile. You're still limited to one land play per turn, paying mana and other costs, etc.

Also, cards like Risk Factor and Vexing Devil cede control of the outcome to an opponent. While either effect would be very good for its cost, putting either one in a burn shell will mean you almost always get the less-useful outcome. A 4/3 for is a great stats/MV ratio, but it has a nonzero chance of being removed before it takes any action, and a dead 4/3 isn't worth anything in a burn shell. While the same "dies to removal" argument can apply to Monastery Swiftspear, in this case the haste means it can attack and disrupt the opponent instead of waiting a turn.

To compare Vexing Devil to a burn staple, Lightning Bolt, both cost . Bolt will virtually always deal 3 damage to your opponent. VDevil may or not, depending on whether the opponent thinks it's an acceptable loss. Ceding control like this decreases consistency, which is a fatal flaw in high-level play. Versatility is best when you control the outcome.

Of course, there is absolutely nothing wrong with pet cards. Reaper of the Wilds is one of my favorites. But the original question asked about Modern burn, and it's reasonable to infer a competitive context. There is no place for pet cards in full competitive play, unless the pet card is or can be established in competitive play. Aikido-burn and punisher-burn sound like fun decks to both use and face, but asking about cards from those decks in a Modern burn context will result in people describing what Modern burn currently looks like.

It's never my intent to downtalk someone's deck. I want everyone to have the opportunity to use what they enjoy. But there's a reason why Aikido cards and punisher cards don't show up in a pure burn deck: they simply don't support the strategy as intended. Aikido and punisher decks can have some card overlap with burn decks, but they are not burn decks.