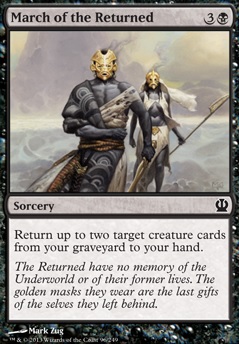 March of the Returned

Choir of Tithes
by BronzeWarden 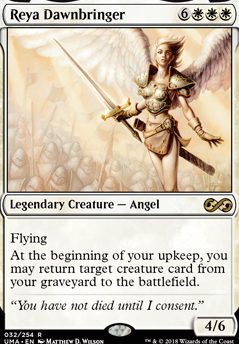 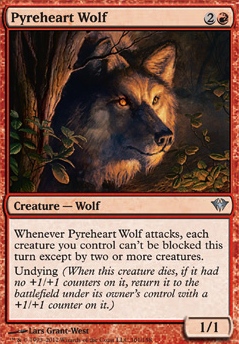 oops all sacrifice!
by IntricateRuse

March of the Returned Discussion

The same goes for March of the Returned

I would either take out Toshiro Umezawa or put in a lot more instants. Cyclonic Rift is really nice, especially with Overload, but if that's your only instant, then Toshiro isn't doing much for the cost.

I'd also consider adding cards like March of the Returned or Recover to be able to bring back some creatures you've sacrificed. Since you only get 1 copy of each card that isn't a basic land, you're not always going to get Patriarch's Bidding, even with your card drawing.

And, lastly, I'd say get some dual lands and/or Evolving Wilds and Terramorphic Expanse. Since you're already a little mana-light for Commander, you don't want to also not have the colors you need when you do get your land.

What I understand from the title of your deck and your description is that you want to make a Superfriends deck that also relies on tokens. However when I look at the list of cards, I feel like you didn't have enough cards in your collection so you filled them with other stuff... stuff that doesn't really synergise with what I think you want to do.

An example of what I mean is Murder Investigation, this card is meant to create tokens whenever the equipped creature dies... but you only have 5 creatures in your deck and only 4-5 noncreature cards that can create tokens. So both Murder Investigation and March of the Returned are kind of useless in the deck. Same with Ogre Slumlord it says "other nontoken" so it only has 4 hits.

Another problem of your deck is that your impactfull cards (the ones that matter to your strategy) cost a lot of mana. I think your land count is a bit too low, I would raise it to at least 36 lands. Also I would add some other ramp cards. When your commander dies it destroys all nonland cards (including your planeswalkers and tokens), for this reason I think you should add some ramp in the style of Kodama's Reach, Harvest Season, Cultivate because it adds extra lands and so should put you slightly ahead of your opponents when your commander dies.

I would also add some extra protection to your deck, for example Crawlspace or Propaganda or even Sandwurm Convergence because it makes tokens too.

If you want to destroy everything with your commander, but not your own stuff, I recommend playing Soul of New Phyrexia or something similar that grants protection to your permanents. I would also add some cards that can sacrifice a creature at instant speed, because with the sac outlet and your commander out you will have considerable political influence at the table (examples include: High Market, Momentous Fall, Life's Legacy)

Ps: I'm trying to make a token deck myself and just found a deck that I will use for inspiration myself (not made by me): nice token deck

To start, remove your Evolving Wilds and Jungle Hollow. Since you're only playing with one colour (black) you don't need to get any other colour. You might consider mono-black non-basic land in the future, such as Cabal Coffers. Not sure what format you're building for, but I'll assume casual for now.

You also need to work out what the goal of your deck is (ie. how you plan to win) and at the moment, you might want to start by getting some more of particular cards that you do have. Ultimate Price is good, but if you can, get Murder. It's slightly more expensive mana-wise but isn't restricted in what creature it can target. Macabre Waltz and March of the Returned are also good, but you might need to decide whether discarding a card or paying more mana is easier for you. If you have cards with madness (such as Alms of the Vein) it would be better to be able to discard. As a new player, you'll want to avoid having singles of cards in your deck so you can better rely on what you draw.

I don't want to overburden you with suggestions, but as a general tip, just keep playing with other players and learn new things. Or buy premade decks and try those out to learn how they work. It's up to you how you want to play Magic. Ask plenty of questions and have a look at other mono-black decks here on tappedout.

If this is for standard, then you'll need to replace March of the Returned. That's been out of standard for a while mate