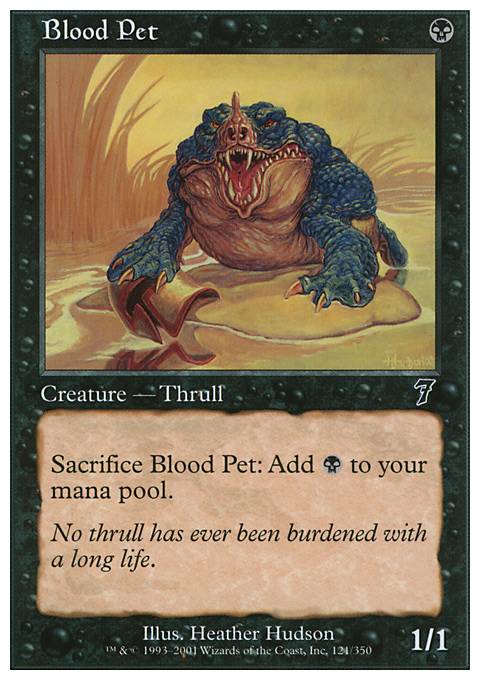 Sacrifice Blood Pet: Add {{B}} to your mana pool.

Gave DeinoStinkus a little lesson on the importance of lands. I think we may see them crop up in his Colossus deck. A good move. I think he didnât expect two Mind Funerals on turn 1 and pitched a Force for a Force with two Probes in hand (I had Probed him about it). I think he wanted to hold the Probes to rebuild and got caught for it. We ratified the occurrence and and got through one more turn before he met a Mind Grind. X=2 was enough to call it good.

I also encountered a Flash Hulk deck that managed to beat me after I had removed roughly 2/3s of his deck with 9 lands. He still managed to get hill kill with a clever pile of Blood Pet for Demonic Consultation mana, Spellseeker to grab Consultation, and Thassa's Oracle. I particularly liked that his build emphasized blue for Force support.

Since you're running the Worldgorger combo you should add Necromancy for redundancy with your Animate Dead effects. In that same vein I would recommend Comet Storm to act as an instant speed wincon for the combo, since the combo can make an infinite loop if you don't have something else in your graveyard to reanimate to break the cycle. Also, little change that can win the game, add Sunscorched Desert. The worldgorger combo can turn that ping land into a win condition.

This is my own budget cEDH decklist for Anje We're All Mad Here (budget cEDH). It's built to have the worldgorger combo, but not be 100% reliant on it. Feel free to give it a look.