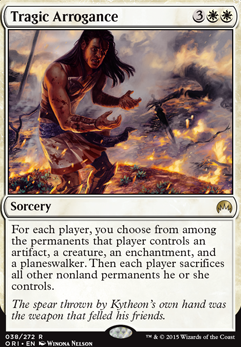 For each player, you choose from among the permanents that player controls an artifact, a creature, an enchantment, and a planeswalker. Then each player sacrifices all other nonland permanents he or she controls.

Tragic Arrogance occurrence in decks from the last year

The Glorious Azorius...Flyers
by WUBRG87 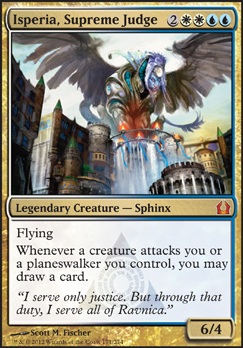 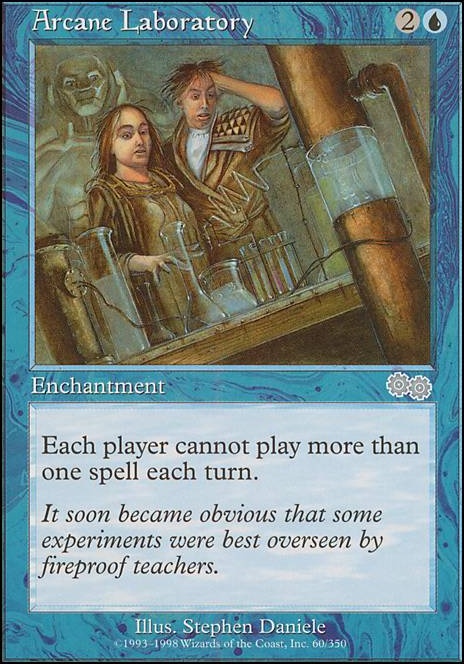 Siona, captain of the combos
by Dexlav94 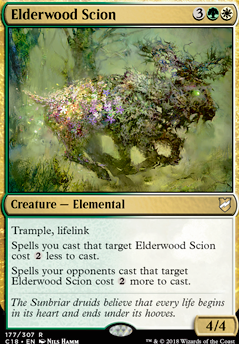 An Arrow to the Heel

I really like your concept here, and I'll definitely have to steal some of your ideas ;)

Just as me, you've included Tajic and Loyal unicorn. I also added The Wanderer for this damage prevention package for redundancy.

I'm not sure about Solar Blaze . If I understand the interaction between this and Haktos correctly, he would actually get killed here at least when he's set on CMC 4, as the source dealing damage to him would be himself.

Hey man! I got a few suggestions. Feel free to ignore any/all of them:

I was really hoping they'd reprint Grasp of Fate in this set of precons, a long with a bunch of the other commander exclusive cards. For the moment, some of the above are just a bit above what I want to shell out for right now.

The Ponder / Preordain inclusions are pretty important. Always hurts to cut something fun for something consistent, but it's the right call.

I'm scouting around my local group for some better jeskai/gold lands to trade for at the moment. I actually have some partially-on-color khans/zendikar fetchlands, but none that have both colors relevant, and right now I only have one nonbasic land here with land types, so I'm holding them for other decks.

Will Kenrith and Rowan Kenrith were definitely something I was discussing with people, since they have pretty good synergy with this deck, and I think this deck is well put together to defend planeswalkers, but I'm intimidated by the 6 cmc requirements on both of them. That said, I think Will is probably fine as his abilities, while a bit more generic in terms of value than Rowan's here, are still pretty great. I might try them out and see how the perform, if for no other reason than the fact that they sound like a lot of fun.

I'm reluctant to run parallel effects like Grand Melee that prompt mandatory attacks in this deck, as I'm not sure my own creatures are up to the task of attacking into one of my opponents every turn.

The wraths I picked here are intentionally situational as I'm hoping to leave some creatures alive with Dusk / Dawn or Tragic Arrogance to maintain the situation that allows me to keep having my opponents fight it out, but that might be too greedy in the long run. There are also better situational wraths, but I'm still trying to keep my costs down.

I may post an "optimized" hypothetical list for this later for use by other people and keep a separate copy for myself with tighter cost restrictions.