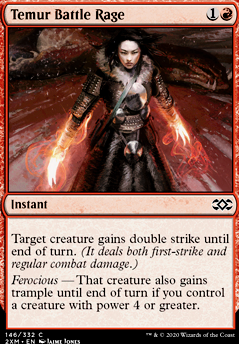 Ferocious â That creature also gains trample until end of turn if you control a creature with power 4 or greater.

Let's Get Ready to Rumble! (Radha, Heart of Keld)
by tardislights22

Tana's Swords and Saprolings
by ellie-is

And a Singleton of Agadeem's Awakening Â Flip as bolting yourself consistently on turn 1 is important. Especially without Thoughtseize

Hey Daveslab2022, thanks for the suggestions. Iâve been playing around with different possibilities like the ones you mentioned. The issue is how far I want to deviate from the focus on burn. The more creatures and non-burn spells I add, the less focused it becomes, and the odds of drawing a burn spell when I need it decrease.

I had the opportunity to test this deck last night, and it had around a 60% success rate against my friendâs extremely fast Green stompy deck, which usually wins by turns 4-6. Thatâs the metric I use to judge my decks. I found that I could have won several games had I drawn a burn spell instead of a creature. Plus Scourges and Shadows donât have trample, and against creature-heavy decks they only serve as blockers. So Iâm considering how to make this build even more effective. Perhaps Temur Battle Rage and/or Anger of the Gods would be useful as well.

Peoyogon hope i understand how to respond on this site.

Seismic Stomp seems good i had also thought to put in Temur Battle Rage but it will be use only for one half (most of the cratures already have trample). another card that i found usefull is Migratory Greathorn, with only 3 mana you can have a basic 3/4 ready to hit (thanks to mutate) and two landfall triggers (turn land + mutate one)

I'm sorry, did that go too fast for you?

Check my Copy and Prowess deck, maybe you get some ideas, I rather use Assault Strobe than Temur Battle Rage , Use 4 Lightning Bolt and get rid of the Shock, then Opt for Preordain since it's not Modern legal, and Slip Through Space it's better than Distortion Strike.

You also need more Mutagenic Growth and Manamorphose to draw cards and Prowess your creatures.

And about Sprite Dragon, hes fast af, and uses counters not prowess, so basically you can bust him up 2 turns until you have enough mana to make him 10 with double strike unblockable.

Have you considered adding Kird Ape? I know it doesn't have a ton of synergy with the madness theme, but it's overall a very strong creature. I would probably cut Temur Battle Rage if I were you because most of your creatures are going to be winning in combat anyway, plus you have Lightning Bolt and Fireblast for those final points of damage. But overall, I really like your deck!